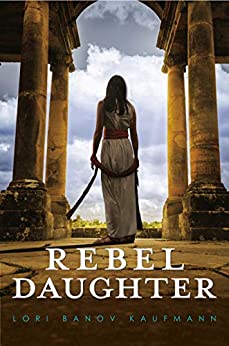 I am delighted to welcome Lori Banov Kaufmann, the author of REBEL DAUGHTER (Penguin Random House, 2021). This fascinating YA novel takes readers back to Jerusalem two thousand years ago. Through the main character Esther, REBEL DAUGHTER brings to life a very significant time in Jewish history. Esther experiences many of the same challenges young women throughout history have faced. As she fights for her personal independence, Esther never loses sight of her obligation to her Jewish community and to her family.

Lori has created a character that is relatable and engaging while providing highly detailed and richly layered historical elements throughout the novel. Not only is REBEL DAUGHTER a compelling read, but it is a sublime example of historical fiction. The depth of research required to create the historically accurate setting is a feat in itself. REBEL DAUGHTER is an adventure that should not be missed.

Lori lives with her family in Israel. I could not wait to learn about her journey researching and writing REBEL DAUGHTER.

REBEL DAUGHTER takes us back in history to 70 CE,  a tumultuous time for the Jewish community in Jerusalem. What inspired you to write about this particular period of time?

I didn’t set out to write about this period. I fell into it by accident! I was inspired to write Esther’s story after learning about the discovery of her two-thousand year-old gravestone, an exciting and important archaeological find. It was the mystery behind the stone that drew me in and made me want to know more. Who was she? How did a girl from Jerusalem become a Roman woman buried in Italy?

And from there, I began to research the time period. I was stunned that I knew so little about one of the most formative eras in human history. It is a fascinating period that has many parallels with our world today, especially the civil discord and religious fanaticism.

You tell the story of Esther, the daughter of a priest. Esther is brave, bold, and unafraid in spite of the challenges she faces as a young woman, including an impending marriage to a man she does not love.  Did you face any challenges in creating a character that was historically accurate yet infused with the ability to see beyond what was expected of her?

Yes! That’s a great question because of course girls in the first-century didn’t have the freedom we’re used to today. Sexism was not only alive and well, it was considered necessary for the proper functioning of society. And I was absolutely committed to writing a book that was historically accurate. I felt an obligation not only to the real historical people whose story I was telling, but also to my readers.

So the challenge was how to portray a bright, curious young woman who lived thousands of years ago. For example, Esther had a thirst for knowledge, an innate human trait. She wouldn’t have gone to school, of course, but scholars have determined that there were women who were literate in first-century Jerusalem. So she probably learned to read and write at home. And in Esther’s case, from her father. I had to show how Esther navigated the very real gender barriers of the time.

You explore the daily life in Jerusalem in great detail – from chores and religious practices to the struggles between the Jews and the Romans. Can you share a bit about your research process?

I wouldn’t call it a “process”! It was more like an obsession. I had a sense of obligation to portray the time and setting as accurately as possible and a fanatic attention to detail. I read literally hundreds of books, dissertations and conference proceedings. I also worked closely with the leading historians of this era. Luckily, I live in Israel and had access to the artifacts at the Israel Museum, the archaeological sites all over the country, and the world-class scholars at Hebrew University and Tel Aviv University. My “process” is why this book took me 10 years to write! In retrospect, I realize that I went completely overboard with the research but it truly was a labor of love.

What were some interesting facts you discovered that did not make it into the book?

How much time do you have? There are so many! My first draft of the book was over 1000 pages because of all the “interesting facts”. My editor insisted that I couldn’t describe everything – how face cream was made from sheep fat or bread baked in clay ovens.

What do you hope readers take away from REBEL DAUGHTER?

I hope readers are taken away! I want them to have the feeling of going back in time. I want them to enjoy the trip. That’s my main hope. And if the experience makes them see our own world in a new light, then that’s a bonus.

This book was published as a YA title, but adults are reading it too. Young readers will enjoy the gripping, fast-paced plot but adult readers will probably connect more to the deeper themes the story raises and appreciate the historical detail.