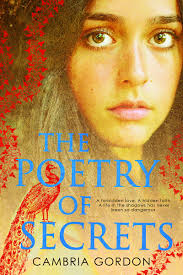 Welcome Cambria Gordon, the author of a new YA novel, THE POETRY OF SECRETS. Through the eyes of Isabel, readers will have a window into the lives of conversos – Jews forced to convert to Catholicism in Spain in the 1400s. Isabel’s family makes great sacrifices to practice their religion in secret. Isabel seeks to learn as much as she can about Judaism, even when it is dangerous to do so. Caught between worlds, Isabel longs for independence. Her greatest joy is writing poetry and her greatest fear is missing out on true love. THE POETRY OF SECRETS is historical fiction inspired by real people and events. It is a stunning novel. Readers will root for Isabel and her quest for the life she deserves. I am excited to share Cambria’s journey to create this book.

What inspired you to write about the Spanish inquisition and create your main character, Isabel?

In 2016, I moved to Madrid with my family for a year. We traveled throughout Spain on weekends and on school breaks. I saw many churches, a few less mosques, but hardly any synagogues. Yet, in certain cities, there were always “Jewish quarters”, streets demarcated by a symbol that meant Jews once lived there. I began to wonder, what happened to all the Jews of Spain? Why were these neighborhoods devoid of any remnants other than the occasional Hebrew letter etched into a brick in a modern building? I hadn’t studied the Inquisition when I was in school in Los Angeles so I didn’t know the history. I read all I could, both fiction and non-fiction about this time period. And like I always do whenever I think of the past, I imagined myself living there. I asked myself what would I have done if I were a Jewish teenage girl in medieval Spain and fell in love with the wrong boy. Would my religion matter to me? Would I defy my family? What would it feel like to be a minority in a country ruled by Church and Crown? The story of Isabel unfolded from there.

Through Isabel’s experience, we learn a lot about what Jewish families experienced during the Spanish Inquisition.  Some Jewish families converted, some like Isabel’s practiced their Judaism in secret, and others (like the Cohens) maintained their Jewish identities publicly. Can you share just a bit about the different challenges these families faced?

Faithful Jews like the Cohens seem to have the most freedom in the book, which is ironic, because they are the minority and face oppression daily. Anti-Jewish laws, like the 1935 Nuremburg Laws in Germany, were constantly being passed by the Priests in the 14th and early 15th centuries. Jews (and Muslims) had to live walled off from Christians. No one could see a Jewish physician nor purchase food from a Jewish merchant. Christian women could not be wet nurses to Jews. Jews were ordered to wear a round cloth on their right shoulder, identifying them. These were just a few of many restrictions. The King and Queen largely ignored these Church mandates, not wanting to be deprived of their most capable constituency. But the sentiment on the street lingered. It gave haters permission to de-humanize the Jews. On the opposite end, crypto Jews like Isabel’s family lived in fear of discovery every day. And were also judged by their Jewish friends as sell-outs. So they felt more and more isolated. Converso families who abandoned their Judaism forever and socialized with Old Christians held the most advantages. They even acted as spies themselves and turned in their neighbors. But toward the end, they weren’t safe either. Baptism alone wasn’t adequate. If you had an impure blood line, the Inquisition was always watching.

Isabel feels a strong connection to her Jewish identity, especially through her grandmother. They both take risks, including studying a stolen Talmud. What roles did women play in maintaining Jewish family life during this time?

Jewish women were the cooks and maintained the home. They lit the Shabbat candles and ensured that the festivals were celebrated. They visited the mikveh. But they did not go to Synagogue. And they certainly didn’t study Torah or Talmud. In the enlightened medieval centuries before the Inquisition, upper class Jewish girls could receive an education with a private tutor or sit in on their brother’s classes at home. After the expulsion in 1492, Jewish Spanish ladies wrote letters to family members who had spread out all over the globe so we know many could read and write. But for most women in 15th century Spain, their domestic role was similar to the Haredi Orthodox communities we know of today.

Isabel’s family is willing to arrange a marriage with Don Sancho, a very unkind and unappealing man. Were such “matches” typical for converso families?

Yes. Though mostly the matches were between two New Christian families. This was the safest way to ensure that everyone involved knew the other family’s history and blood line. Isabel’s match is unique, because Don Sancho is an Old Christian. He’s willing to overlook her family history because she’s so beautiful.

What inspired you to use poetry as a means for Isabel to express herself?

I came across an article in the Jewish Women’s Archive about a Jewish poetess named Qasmüna who lived in Spain in the 11th Century and wrote in Arabic. I dug further and found there were other female poets in Spain, both Muslim and Jewish. I was fascinated by these independent women who wrote of love and passion, some anonymously and some using their own names. Even though it was a time filled with science and spiritual enlightenment and progressive thought, being a female poet was still daring. Deciding to have Isabel be related to Qasmüna allowed for a connection to longing and expression. It brought Isabel alive so that she was more than just a girl who didn’t want to get married to the man her parents chose.

Was Isabel’s love interest, Diego, inspired by a real person?

Diego is every hot guy I wanted to date in high school, but wouldn’t give me the time of day! He’s definitely a fantasy, but I made him much more substantive with his education and love of Italian art. I suppose that part of him, the brainy gallant part, is like my husband.

Can you share a bit about the extensive research required to write THE POETRY OF SECRETS? You include a lot of historically accurate information about the setting as well as real people. How did you balance historical and fictional elements?

I had no idea I was such a research geek. When I think back on all my favorite books growing, up, it makes sense. I loved the magical world-building of Zilpha Keatly Snyder (And All Between) and foreign stories of orphans – Oliver Twist, Pippi Longstocking, The Secret Garden. I was always drawn to boys or girls who were nothing like me, placed in impossible situations. When I first came up with the idea for The Poetry of Secrets, I panicked. What if I couldn’t write historical fiction in a voice that felt authentic to the time? I did read many adult fiction books set during the Inquisition. That helped me gain the confidence to write it in 3rd person-close point of view. The etymological dictionary was my best friend. If a word wasn’t in the lexicon in the 15th century, then I couldn’t put it in dialogue. I had a pile of non-fiction books on my desk at all times. It’s a delicate dance, not to overdo it and throw in too many facts, as in: “your research is showing”. It’s also a challenge when to stop going down the rabbit hole of research and start writing. But I think the key for any writer out there is to literally step into the shoes (and dresses!) of your character as he or she walks the streets. Smell those spices, see that puddle, hear that neighing horse. That ensures you will always know how it feels to be them and help you keep the dry historical stuff at a safe distance.

What is a fun fact you learned in your research that didn’t make it into the book?

I learned that Jews practiced polygamy and could have more than one wife. Also, Jews would make fake “pork chops” or chuletas de cerdo. It was really just bread and milk and eggs (like French toast) shaped like a pork chop. They covered it with tomato preserves and pimentos to trick the neighbors.

Thank you, Cambria. Wishing you much success with THE POETRY OF SECRETS!

Cambria Gordon is the co-author of the award-winning book, THE DOWN-TO-EARTH GUIDE TO GLOBAL WARMING. She lives with her family in Los Angeles and Madrid.