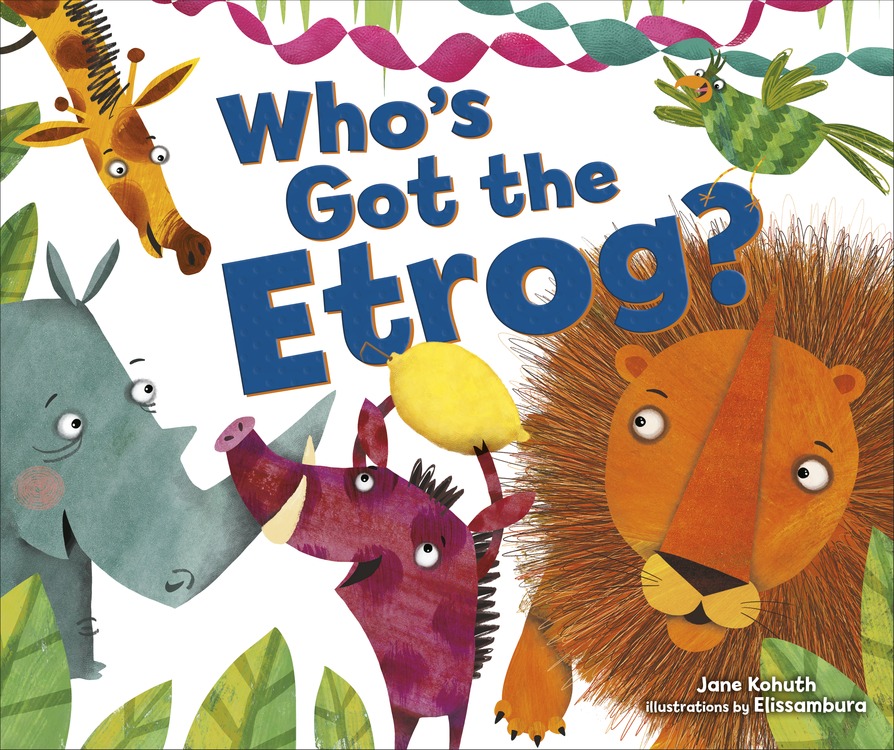 It is such a pleasure to introduce Jane Kohuth, another wonderful author I met at the Yiddish Book Center TENT program. I was already a fan of Jane’s books, including Esty the Mensh and Anne Frank’s Chestnut Tree. Jane’s newest book is a  Sukkot story set in Uganda, Who’s Got the Etrog? (Kar-Ben). Young readers will love the playful rhythm and the whimsical animal characters beautifully illustrated by Elissamubura. I’m so glad I have to chance to meet Jane and learn more about work.

What inspired you to create WHO’S GOT THE ETROG? How did you learn about the Jewish community in Uganda?

I wrote the initial drafts of Who’s Got the Etrog? quite a few years ago. Sukkot was one of my favorite holidays when I was growing up, and still is, and I wanted to write a picture book about some aspect of the holiday. My agent and I were playing around with ideas, and we came up with the rhyming phrase, “Don’t hog the etrog.” That sat on my ever growing idea list for a while, until I took it up and started working out a story to go with the line.

For a long time I have wanted to see more playful, fantastical picture books featuring Jewish characters and characters of color, since I find that so often (American) books featuring non-majority characters tend to be quite serious and to feature only humans. Anthropomorphized animals are a great tradition of picture books, and when they celebrate anything it tends to be Christmas, so I wanted to write a story in which the animals celebrated a Jewish holiday. I remembered the tradition of the Ushpizin, the famous biblical guests of who, in legend, visit the sukkah on each night of the holiday, and inspired by that, I wrote a story about a woman who has animal friends visit her sukkah on each night of the holiday. One of her animal friends is so enamored of the wonderful smelling etrog (a smell I have always adored) that he won’t let it go so that everyone can hold the lulav and etrog and say the blessings. This goes on in the tradition of the cumulative tale, as more animals come to the sukkah on each successive night, and get increasingly upset with the guest who will not share. Finally, the woman’s young niece arrives, and set thing straight.

When I revisited this story after some time, I noticed that many of the animals I had chosen were African animals, and it suddenly occurred to me that the story could take place in a Jewish community in Africa. I had never seen an African Jewish community featured in a book for young children. I think that many people, both Jews and non-Jews, are unaware of how diverse the Jewish community is and of the many places in the world in which Jews have lived and continue to live. I was excited about the idea of having a story which would introduce American Ashkenazi Jewish children to the wider Jewish world, and one in which Jewish children of color would have a mirror, since not enough of those books exist yet.

The websites of the Jewish organizations Kulanu and B’chol Lashon, which work with Jewish communities around the world, were my jumping off point for research. Even though the setting of the story is shown through visuals and not the text, I chose to learn as much as I could about the Abayudaya community of Uganda. I read many articles about the Abayudaya and by members of the community, listened to some of their Jewish music, looked at photos and videos, and, when the book was sold, had Kar-Ben find a reader with personal experience to vet it. I am now working on making connections to people in the Abayudaya community — if they are interested, I am hoping that we will be able to provide copies of the book for the schools in their communities and that I might be able to do an author visit via Skype.

Ironically, the original title and line that jumpstarted the story, “Don’t Hog the Etrog” did not make it into the final text. It was felt that “hog,” even as verb, seemed a bit too trayf (non-kosher)! The main animal character is a warthog, though, so that hog/etrog rhyme is still in there.

I love how you incorporate animals in such a playful way, yet showing characteristics that reflect their nature. Did you do a lot of research on animals and their behavior?

I admit to not researching animal behavior. In the grand tradition of picture book fantasy animals, I let them act however I liked, though I drew on the basics (quiet giraffes, squawky parrots). I did, however, research the wildlife of Uganda, to make sure that all the animals featured in the book could potentially be found there.

What was your reaction when you saw the illustrations by Elissamubura?

Elissambura’s illustrations exceeded any expectations I had. They are so playful and joyful, and make me feel the same way when I look at them. She managed to give the characters so much personality, particularly little Warthog, who is the cutest warthog you’ve ever seen. Her illustrations add a dimension of empathy for his behavior and really make you want to root for him.

Where can young readers and families learn more about the Abayuda?

Thank you, Jane. Wishing you much success with Who’s Got the Etrog?

2 thoughts on “Jane Kohuth – Who’s Got The Etrog?”