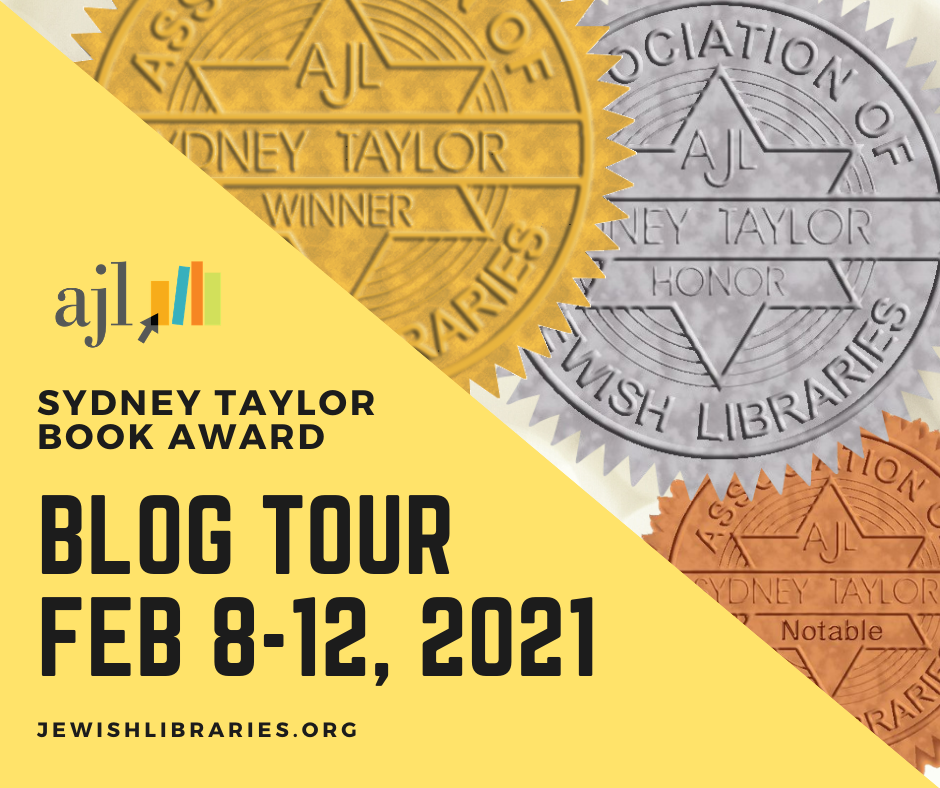 Welcome! It is a delight to be a stop on the Sydney Taylor Book Award Blog Tour. The Sydney Taylor Book Award is presented annually by the Association of Jewish Libraries “to outstanding books for children and teens that authentically portray the Jewish experience.” The year’s Young Adult honor winner is THEY WENT LEFT by Monica Hesse, published by Little, Brown Books for Young Readers, an imprint of Hachette Book Group.

THEY WENT LEFT is the heart-wrenching story of eighteen-year-old Zofia Lederman. In 1945, after the war, she begins desperately searching for her brother Abek. Through Zofia’s eyes, readers have a window into the physical and emotional suffering of survivors as they struggle to create new lives. There are several skillfully plotted mysteries throughout Zofia’s journey that keep the story moving. Ultimately, it is Zofia’s unrelenting sense of love and loyalty in spite of all that she had endured, that will keep her in the hearts of readers for years to come.

I’m honored to have the opportunity to chat with Monica Hesse about THEY WENT LEFT.

THEY WENT LEFT is told in first-person. Was this a purposeful decision? How challenging was it for you to access Zofia’s voice?

Once I read an interview with a pretty famous author who claimed that the protagonist of her book had come to her in a dream. At the time I thought that sounded completely made-up. Seriously, who dreams of their protagonists? But I think that with Zofia, I had the closest possible experience to that. On the first day I sat down to write THEY WENT LEFT, an image came to me of a teenage girl sewing a secret message into her baby brother’s jacket. From that moment on, I just wanted Zofia to tell me more of her story.

You discuss your extensive research process in an author’s note. The setting is pivotal to the story, yet THEY WENT LEFT is very character-driven. Zofia is a layered, nuanced, complicated protagonist. As a writer, how did you balance these elements?

I don’t think I could have known anything about Zofia without knowing where she came from: the city she grew up in, the business her family owned, the camps and forced labor factories that someone her age and with her skills would have been sent to. The secret of historical fiction is that your research files are always a thousand times bigger than what you can fit into the book, but you still end up using all of it, in one way or another. Like, I learned so much about the factory district in Sosnowiec, the city where Zofia grew up. Ultimately, in the book I spend only a few paragraphs describing downtown Sosnowiec, but knowing what it would have smelled like, or how crowded it would have been, or what you would have eaten for lunch there in 1940 — all of those things would have contributed to who Zofia was. We’re all shaped by our geography and our era.

There are twists and turns throughout the novel. Did you plot the story before you began writing or did it unfold as you wrote?

I always knew where the story would end up because, in fact, I usually write my novels backwards: the last book chapter is frequently the first thing I write. But what I don’t know, in the beginning, is how to get there. What would have brought the characters to this pivotal scene? What would have happened to them, that they would behave this way? That’s always the mystery I’m trying to solve as a writer. Not what happened, but why it ended up happening that way — why there was no other possible ending for these characters.

In a recent piece for The Washington Post you wrote, “Empathy is a muscle. It would do all of us good to strengthen it, and that means not just reflecting on our experiences but exercising our imaginations.” How does fiction help us exercise our empathy muscle?

Anything that invites us to step into someone else’s world is an act of empathy. A novel creates a microcosm of a world: it delivers that world in a small, powerful, printed way. Reading a good novel should feel like reading another person’s heart and realizing that yours is beating in tandem.

You have written several novels about WWII. What inspires you to create these stories? What do you hope your readers, especially younger readers, take away from THEY WENT LEFT?

I keep writing about WWII because there are so many stories left to tell. My first two novels took place in 1943 and 1944, right in the thick of the war. After spending so much time in that setting, I wanted to know what happened after: after liberation, after D-Day, after the American tanks went home and regular girls like Zofia were left to pick up their lives again. I wanted to know the ending. And what I love about Zofia’s story is that we do learn how her quest ends, but it’s not what she expected. And it’s not what she wanted. But it is its own kind of hopeful, and it opens its own kinds of doors.

If anything, I hope that’s what readers take away: Endings don’t always look like endings, hopefulness doesn’t always come from what you hoped for, your journey rarely takes you to the destination you had planned.

What does it mean to you to receive the honor award from the Sydney Taylor Book Award Committee?

Words can’t even describe it. From the moment I started working on THEY WENT LEFT, my only goal was to do honor and justice to this post-war period that is often skimmed over in history books. Receiving a Sydney Taylor honor award makes me hope that I was able to do that. And moreover, it makes me hopeful that more readers can learn about this era, when so many brave survivors started new chapters of their lives.