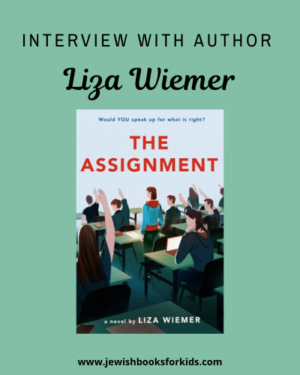 Liza Wiemer is an award-winning educator with over twenty years of teaching experience. Her second young adult novel, The Assignment (Delacorte Press, 2020) tells the story of a  high school assignment that requires defending the position of Nazis during World War II. Liza utilizes multiple points of view to tell this compelling story. Beautifully crafted, with realistic characters that bring the story to life, THE ASSIGNMENT is a book that will engage readers in a meaningful way. The story brings to light both subtle and overt forms of prejudice – and has the power to change hearts, minds, communities, and the world. This week, The ASSIGNMENT received a Sydney Taylor Notable Award from The Association of Jewish Libraries. Mazel tov, Liza!

It is an honor to chat with Liza and learn more about the creation of this important book.

Can you tell me a bit about the real “assignment” that inspired your book, The Assignment?

First, thank you so much for having me!

The real assignment was similar to the one in my novel in that the teacher created a memo addressed to the fifteen Nazi leaders who attended the Wannsee Conference. Students were to pretend they were Nazis and write a position paper supporting the Final Solution based on the perspective of the “sides” presented at the conference. The real assignment asked if the students were surprised that there were Nazi members who were against the Final Solution. This was absurd. The Nazi “discussion” was whether to sterilize Europe’s 11,000,000 Jews and put them in work camps and ghettos versus extermination. In other words, torture them and work them to death or kill them outright. The teacher left the door wide open to Nazi beliefs, allowing for students to legitimize the Nazis’ position that Jews were not only an inferior race, but must be exterminated.

Once you decided to write a novel about the situation how challenging was it to come up with the detailed assignment in your book?

I worked really hard at retaining the idea of the original assignment, but instead of having students write a memorandum, I created a debate, pitting half the class against the other half based on the conversations of the 15 high-ranking Nazis at the Wannsee Conference. The so-called two sides were both murder: a slow tortured death by starvation, disease, and hard labor or extermination. It’s chilling. To create an assignment based on this was a painful process, but I drew upon my teaching skills, thinking about what kind of information I would want students to research for this hideous assignment. This required my own research, and I spent many drafts tweaking the wording and making sure that it conveyed a clear example of what never to give students.

The Assignment features multiple POV. Why was this important?

I so appreciate this question because the multiple points of view were key to this novel. An assignment like this has a broad impact. I wanted to show readers that the two protagonists weren’t the only ones effected by the assignment. It impacted the students in the class, the teacher, the school, the community, and ultimately caused global reactions. By sharing secondary characters’ perspectives, I’m able to show readers that one small pebble rolling down a cliff can cause an avalanche of destruction. That’s what happened when the teacher gave this assignment.

Readers don’t always realize that fiction often requires research. What kind of research did you do for The Assignment?

I did extensive research on the Holocaust and antisemitism today. I went to original sources, watched historical footage and documentaries. I read countless books and websites. Online, I discovered that this assignment wasn’t an isolated incident. Unfortunately, I discovered many similar assignments. I interviewed many experts and traveled to Oswego, New York to learn more about the Fort Ontario Emergency Refugee Center—the only refugee center in the United States during WWII. Shocking that only 982 refugees were admitted when there were over 425,000 German POWs on American soil. I learned a lot, but the more I learned the more I realized that I could spend every day for the rest of my life studying this topic and there would still be much more to learn. It’s humbling. One of my goals was to share information that would be “new” to the vast majority of readers. Some people say, “Enough already on the Holocaust. Let’s move on.” But there are still many lessons we need to learn. With antisemitism at a forty-year high, we must do a better job educating our students about the consequences and the destructive force of hate. We cannot be silent.

Since your book came out, many have been inspired and others have come forth about similar situations that have occurred in their schools.  What are your thoughts about the ripples of change The Assignment has created?

I’m humbled and grateful to say that I’m already seeing the positive impact this novel has had on readers. It’s given students and parents the courage to speak out against similar assignments and other injustices. It’s made people think about what they would do when faced with antisemitism, racism, sexism, and other forms of hate. Other examples of the impact the novel has had was when I spoke to several educators who had given similar assignments and now realize that their educational approach was wrong. Each person said to me that they hadn’t realized that they were doing something wrong. Looking back and reflecting on the outcome, each person was horrified that they had given a similar assignment. People make mistakes. Brave people learn from them and make positive changes. Imagine the ripple effect that this positivity can have not only on the students in the class but on the entire community. To me, that’s profound.

Thank you, Liza!  A final personal note – I highly recommend the audio version of THE ASSIGNMENT. It is outstanding.

Learn more about Liza and her work here: Liza Wiemer