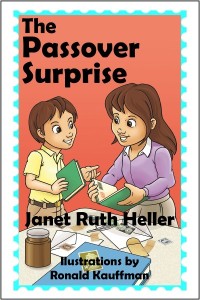 Janet Ruth Heller is a poet, literary critic, college professor, essayist, playwright, and fiction writer. She is a past president of the Society for the Study of Midwestern Literature, currently president of the Michigan College English Association. Janet has been featured in many journals and literary magazines and has published three books of poetry: Janet’s picture book, How the Moon Regained Her Shape (Sylvan Dell, hardback 2006, paperback 2007) received numerous awards. Her newest book, The Passover Surprise (Fictive Press, 2015) is a chapter book set in the early 1960s. Through the eyes of Lisa, readers explore a variety of themes related to freedom and equality. I am excited to share my chat with Janet about The Passover Surprise – a story that will be enjoyed by readers all year long!

The Passover Surprise deals with a variety of themes, including conflict resolutions, relationships, and civil rights. How do you see these topics as related to each other and to Passover?

Like Lisa in The Passover Surprise, I have learned to control my strong feelings in order to get along better with other people. Also, I believe that humans could prevent many conflicts and wars if we tried harder to understand opposing viewpoints and different cultural values. Mutual respect among diverse people is also a key to civil rights. The Jewish holiday of Passover emphasizes that enslaved individuals need freedom to fulfill themselves. Slavery is the ultimate form of disrespect. Passover also emphasizes that oppressed people have the right to defy tyrants like the Egyptian Pharaoh and to escape from intolerable situations. Some African-American spirituals draw on the Exodus story because both Jews and Black people have suffered from slavery and oppression.

Stamp collections play a key role in the story. Are you a collector?

The Passover Surprise is partially based on a real incident from my childhood. Like Lisa and Jon in my book, my brother and I collected stamps with our father when we were young. My father did hold a competition between us two siblings. When my father gave the prize to my brother, although both of us siblings had worked equally hard on stamps, I felt deeply hurt and angry. However, unlike Lisa, I did not know how to talk to my father about my disappointment. I decided never to collect stamps again. Because of my background as a young collector, I do know some of the basic issues in stamp collecting. I also did research for this book about stamps from countries outside the United States.

How do you think Lisa’s social and religious experiences might differ from those of a young girl of today?

The Passover Surprise takes place around 1960. The Civil Rights Movement was gaining support but had not yet achieved legislation that forbade discrimination in employment and education. Similarly, the late twentieth-century Women’s Movement was starting challenge traditional stereotypes of women. The French feminist writer Simone de Beauvoir published her key book The Second Sex in 1949, and the American feminist Betty Friedan published her ground-breaking book The Feminine Mystique in 1963. Both of these books, which I read in the early 1970s, strongly influenced me. Many Jews supported the Civil Rights Movement and marched and demonstrated in the South and elsewhere during the 1960s and 1970s. Jewish feminist magazines like Lilith (founded in 1976) and the ordination of Rabbi Sally Priesand (1972) also loomed on the horizon. Many synagogues did not count adult women in a minyan for prayer services, did not let women lead prayers, and did not allow women to serve as synagogue presidents. Finally, educators in 1960 often treated women students differently from men in classes and often encouraged women to pursue traditionally female careers, such as being a secretary, librarian, nurse, or elementary school teacher.

If the events in The Passover Surprise were taking place in 2015, Lisa’s synagogue would be much more egalitarian in its treatment of women and girls. Also, civil rights for people of color are much more established now. So the open-minded position of Lisa’s father, who enjoys playing basketball with African-American soldiers in France during World War II and respects them, would not be as unusual. I’m basing Lisa’s father’s war experiences on those of my own father as narrated in his letters to his parents during World War II.

The Women’s Movement has now made discrimination against girls and women a top priority for most organizations, and this might have made Lisa’s father less likely to make a hasty decision about who would win the stamp collecting contest. Schools now study women’s role in world history, so Lisa would get even more exposure to “herstory” and to the ideas of leaders like Susan B. Anthony and Sojourner Truth. In The Passover Surprise, Lisa’s teacher Miss Maimon anticipates later trends when she encourages Lisa to study important American women like Edna St. Vincent Millay and athletes like Babe Didrikson Zaharias.

Many synagogues now have egalitarian prayer services, women rabbis or cantors, and women presidents. Reform, Reconstructionist, and Conservative Jewish organizations and individuals have revised the liturgy to include the matriarchs whenever the patriarchs get mentioned and to use English translations that use gender-fair terms for God, such as Creator and Sovereign.

I usually have to revise fiction and essays more times than poems, so it takes me longer to finish a prose piece. I like the concise language of poetry, which enables a writer to pack a lot of meaning into a few words. However, prose needs to be more detailed, to expand and explain ideas. Members of my Writers Group have helped me to revise The Passover Surprise, and that is why I have dedicated this book to them. For example, this book was originally presented in third person format, but I changed it to first-person narrative from Lisa’s point-of-view to sharpen the book’s focus on her learning process and maturation.

My mother was always close to her twin brother Robert Pereles, and we always celebrated major Jewish and American holidays together with his family in Milwaukee when I was growing up. Thanksgiving and Passover were especially fun for our family. My mother and my Aunt Ann took turns cooking meals, the boys would do football scrimmages, the girls would try to break the sex barrier, and everyone told jokes at the dinner table.

Learn more about Janet and her work – www.janetruthheller.com