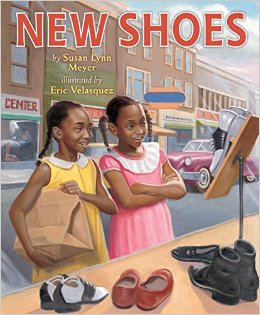 Susan Lynn Meyer is the author of two picture books, New Shoes and Matthew and Tall Rabbit Go Camping. She is also the author of two middle-reader historical novels, Black Radishes (winner of the Sydney Taylor silver medal) and Skating with the Statue of Liberty (forthcoming from Delacorte in 2016), both inspired by her father’s experiences as a Jewish boy in France and then in America during World War II. She lives outside Boston with her family and teaches English and creative writing at Wellesley College.

I first met Susan in 2011 at the Association of Jewish Libraries Conference after her book Black Radishes, won the Sydney Taylor Honor Award. I loved Black Radishes and was delighted to spend time with Susan at the conference. Susan’s latest picture book, New Shoes (Holiday House) Illustrated by Eric Velasquez) explores the impact of Jim Crow laws and two brave little girls with a clever plan to help their community. Susan’s warmth shines through in the emotionally driven stories she writes. I’m so pleased to share this interview with Susan about her work.

What inspired you to write New Shoes?

I was researching the novel that I have just finished writing, Skating with the Statue of Liberty (forthcoming from Delacorte in 2016). Skating was inspired by my father’s experiences as a French Jewish refugee in New York City in 1942 (it is the sequel to my novel Black Radishes, which takes place in France). Skating is about the friendship between Gustave, the French Jewish boy, now 13, and an African-American girl in his class, as he adjusts to life in America—and about his discovery, through that friendship, that America isn’t the country free of racial discrimination that his family had hoped to find.

While researching the aspects of racial discrimination that were present in 1940s New York, I started reading more widely about segregation practices in the 1940s and 1950s (and on into the 1960s). I found out a number of things I hadn’t known—for example, that some movie theaters in New York in the 1940s made black customers sit only in balconies.

I was particularly startled to find out about an aspect of Jim Crow that I hadn’t known about—that in many stores throughout the country, black customers in shoe stores were forbidden to try on shoes. I kept thinking about that—about what that must have felt like, especially for a child encountering it for the first time.

Eventually those thoughts shaped themselves into a story—New Shoes.

What was your response when you first saw the illustrations by Eric Velasquez?

I was absolutely delighted. Eric’s paintings are so vivid and so realistic that I felt transported back in time, and the girls in his paintings completely and beautifully embody Ella Mae and Charlotte. Eric has actual models pose for photographs and then paints from those photographs. I had the amazing experience a few months ago of getting a Facebook “friend-request” from the woman who posed for Ella Mae’s mother! She’s also the mother of the model for Ella Mae, so when we became friends and I looked through her photographs, I saw “Ella Mae” in modern-day clothes. It was magical—it felt as if my book had come to life!

I also absolutely love the end papers Eric designed using the actual tracing of his model’s feet. In a simple and stark graphic form, they perfectly encapsulate what the story is about.

Many may not realize that writing historical fiction requires research. What was the research process like for New Shoes?

There were two parts to the research—reading and consulting with people. I read lots of books about Jim Crow, including oral histories of people who had lived through that era. I was especially interested to read about small individual ways that black people resisted Jim Crow—clever ways of circumventing or resisting the restrictions.

Because I’m not black, I felt it was important as well to get some black readers’ responses to the story. One early reader gave me an invaluable response when she pointed out that I had Ella Mae’s mother behaving in a way that felt wrong to her. The mother had said point-blank, after the shoe store experience, that what had happened was wrong. This reader told me that her own older relatives would not have responded that way, that they would have tried to encourage Ella Mae to focus on the positive. I mulled it over, and this felt intuitively very right to me. So now Ella Mae’s mother answers Ella Mae’s questions honestly but also encourages her to think about how nice her feet will look for school.

During the research/writing/publishing process of New Shoes, what has been the greatest surprise?

One wonderful thing that happened was an email I received from a black mother who told me that her young son had been asking her to read aloud two books every night for weeks: I Am Jackie Robinson by Brad Meltzer and New Shoes. I am so touched and honored that by listening to New Shoes this boy is processing and coming to an understanding of African-American history.

We learned about your father’s history in Black Radishes. Do you think growing up knowing his childhood experiences has impacted the other stories you write?

What a great question! No one has ever put it quite that way to me before. Yes, it absolutely has. Growing up hearing my father’s stories about being a Jewish child in France during the Nazi occupation and about his family’s subsequent escape to America definitely shaped my personality and my sense of the world and made issues of social justice resonate deeply with me. My father was deeply appreciative that America had saved his life when he arrived here in 1942, but throughout his life he was also keenly aware of problems in America. He told me about how angry it made him in the 1950s to hear about blacks not being allowed to eat at lunch counters—how it stirred up intense feelings and memories in him. When we were small children, my parents took us to civil rights rallies in Baltimore and to peace rallies during the Vietnam War. As a writer, probably in part because of my childhood, I am drawn to stories about children in difficult social circumstances—in war and facing oppression of a variety of kinds. Then my problem always is—how can the situation be resolved, at least to some degree, or at least on a symbolic level? That’s where I often get stuck! It took me twenty-three drafts over several years before I came up with an ending to New Shoes  that I found satisfying.

Thank you so much for those great questions, Barbara, and for having me on your blog!

To learn more about Susan (including a heart-wrenching tale of Pippi Longstocking) by visiting her website at susanlynnmeyer.com