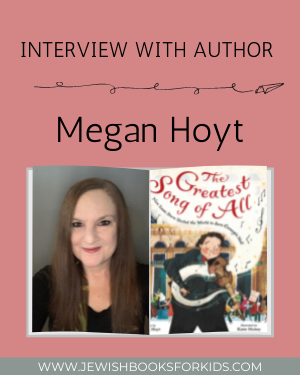 I am delighted to chat with author Megan Hoyt about her upcoming picture book THE GREATEST SONG OF ALL: HOW ISAAC STERN UNITED THE WORLD TO SAVE CARNEGIE HALL (Quill Tree Books, 2022), illustrated by Katie Hickey. This nonfiction picture book takes readers through the history of Carnegie Hall and highlights important figures who performed on the famous stage from Duke Ellington to Albert Einstein. When a city planner proposed to tear down the building, violinist Isaac Stern came to the rescue. THE GREATEST SONG OF ALL is a celebration of acommunity coming together to save a beloved building.

I am so excited to learn more about Megan’s research process and delighted to share the cover reveal for this upcoming book, due to launch in June 2022.

What sparked your interest in Carnegie Hall?

I love architecture and have always felt as if buildings have personalities, as if they are alive and filled with the stories of all the historical figures who’ve graced their passages and rooms. So when I came across an article from 1960 about how Carnegie Hall was to be demolished and replaced with a glass building with cherry red panels, it took my breath away. So many secrets! So much history took place within that building over the course of the twentieth century! And also, with the current racially charged climate here in the United States, I began to think about what unites us and what divides us. From the first day it opened, Carnegie Hall brought in talented performers of all races, religions, and cultures. It felt like a story worth sharing with today’s children. And when I dug in a little more, I discovered that the hall was not only used for musical performances but for lectures and meetings about civil rights. I was hooked. I had to know more.

My parents met performing in pit orchestras in New York City back in the late 1940s–before air conditioning was in all the major performance halls. One day, while they were working as violinist and viola player for the Rockettes at Radio City Music Hall, my mother began to sway from the heat, almost toppling over. My dad went out and bought smelling salts to keep on his music stand in case it ever happened again. Well, of course, it did. He swooped in and put the smelling salts near her nose and that brought her back quickly! They went out for cheesecake after the performance, at the Carnegie Deli, which sadly closed a few years ago. It was their first date! I grew up in Dallas, Texas, which is many tumbleweeds away from New York City. Our house was full of music and laughter — the home of two very talented symphony musicians with the Dallas Symphony and four boisterous children practicing piano, dancing, and celebrating life. But despite the move to Texas, my parents’ hearts were always still in NYC.

Whenever I visit New York, I wander the streets wondering if I’m walking where my lovebird parents walked back in the day. My dad was terribly poor and grew up in Harlem, caring for his invalid mother while his father tried one business venture after another, moving from tiny apartment to tiny apartment, finally taking a job as a street cleaner for the city during the depression. Pop, as we called our grandfather, could not even afford to pay for a seat at the synagogue any longer and one day tore the mezuzah off his doorframe in despair. That’s why my father took up a musical instrument–to get out of Harlem and make something of himself the only way he knew how. While he worked in those pit orchestras, he kept a roof over his parents’ heads.

I don’t remember if I ever met Isaac Stern, but I know my father did. Like my grandparents, Isaac came from a small Jewish village in Ukraine. His parents brought very little with them to San Francisco, only hopes and dreams. Isaac was ten months old when he emigrated to the US, so he was raised speaking both Yiddish and English. His mother was his first music teacher. She had been a singer back in Ukraine. His father painted houses. Compared to the pogroms and anti-Semitism they left in Ukraine, they felt safe and were happy. But they never forgot their heritage and continued to fight against anti-Semitism wherever it reared its head. So anyway, the idea of showcasing a hero who stood up for Carnegie Hall, and stood up for civil rights, too, was very appealing to me.

Why was Carnegie Hall going to be demolished?

There is a hero and also a “villain” to this story. Robert Moses was a city planner who was eager to plow down acres of buildings in order to create more structure for the New York City of the future. He was heavily invested in the new Lincoln Center, too, so he wanted to tear down Carnegie Hall since it was a competing venue. He did not count on the tenacity of Isaac Stern!

Tell me a bit about your research.

I went to Carnegie Hall and spoke to the archivists, who so generously opened the archive to me and allowed me to read articles, newspaper clippings, letters, and interviews. I remember one letter from a little girl named Alma. She thanked Isaac Stern for saving the hall so she could come to concerts when she grows up. So sweet! Alma was ten or eleven years old, I think.

I also took loads of photos. And next door to Carnegie Hall is the Russian Tea Room, which Isaac considered his second office. He met with influential people there to brainstorm ways to save the hall. What a gorgeous restaurant! And there is an entrance to it from the hall as well as from the street, so I can picture Isaac stepping backstage and greeting fans but then sneaking over to the tea room for a bite to eat late at night and to meet with others who wanted to save the hall as much as he did.

We are celebrating the cover reveal for THE GREATEST SONG OF ALL. Tell me about it!

Illustrator Katie Hickey brought this story to vivid, colorful life. Initially, her Isaac Stern was tall and thin. He looked quite handsome and glamorous! But I told my editor it didn’t look like the Isaac Stern who saved the hall — short, stocky, his sleeves rolled up and a phone glued to his ear. This new rendering is more like what he actually did look like. He was not a Hollywood glamour character. He was an artist, a gifted prodigy who brought beauty and joy to a world that was struggling to find itself after a World War and subsequent distrust and strife. I’m so grateful for the opportunity to share his story with children today.

Thank you, Megan! I can’t wait for your book to hit shelves.

Megan Hoyt first fell in love with reading on a cozy branch of the crabapple tree outside her Texas home. (Marguerite Henry’s “horsey books” still remind her of the Texas cicadas at dusk.) She is the winner of the 2017 SCBWI Work in Progress Award and serves as Membership Coordinator for the SCBWI Carolinas region. Megan’s debut picture book biography, Bartali’s Bicycle, came out in Feb 2021 with Harper Collins’ new imprint, Quill Tree Books. Three more non-fiction picture books are forthcoming, also with Quill Tree. Megan speaks at SCBWI conferences and workshops for teachers in the US and Canada. When she is not writing for children, she tutors child actors on set—most recently for the upcoming movie, Are You There, God? It’s Me, Margaret, based on the award-winning book by Judy Blume.