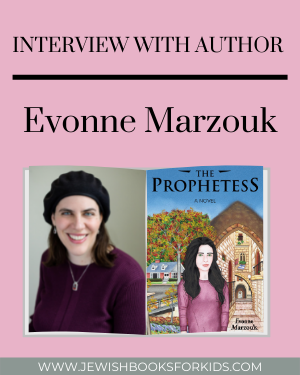 Evonne Marzouk’s YA novel THE PROPHETESS (Bancroft Press, 2019) tells the story of Rachel, an American teenager who discovers her unique gifts, leading her to explore her own faith and what it means to her. This engaging story uniquely incorporates Jewish wisdom with fantasy and deftly weaves in Rachel’s contemporary life challenges. I am excited to learn more about the writing process of this uniquely layered book.

Tell me about what inspired you to write a story about Rachel, a contemporary girl who is faced with her call to be a Prophetess?

As a young woman, I deeply wanted to be a heroine who made a meaningful difference in the world. I wanted to develop my own gifts and understand how they fit with my life’s purpose. After my grandfather died when I was 17, I wanted to know more about life and death and what it meant to have a soul. I explored different religions to try to find inner peace and deep wisdom. Although I didn’t have a strong Jewish education, I kept coming back to Judaism, and to my own very personal (and not particularly religious) relationship with G-d.  It was to try to answer many of my own questions that I first began writing this story, twenty-five years ago at age 19.

Now, if you ask a college rabbi (as I did) if a Jewish girl can hear voices that turn out to be authentic spiritual messages, you might hear that “prophecy ended during the second Temple period” and that’s that. But in fiction, we can explore what it would be like if prophecy didn’t end, but just “went underground.” We can imagine that a secret community of Jewish prophets has existed for thousands of years, and have just been notified that a very important mission rests on Rachel, an unsuspecting 17-year old American girl.

The superpowers of prophecy are not physical strength or amazing speed, but feminine and Jewish superpowers like intelligence, insight, empathy and love. My goal with this book is to empower women – and especially teen girls – to develop their own personal superpowers and be heroines in their own lives.

How did you balance the writing process that required you to join the contemporary world with ancient Judaism?

I was so proud when Kirkus, in its review, commented that The Prophetess “exquisitely accomplishes a partnership between the divine and the quotidian,” because this is exactly what I intended: to write a story that authentically reflects the teen American experience while at the same time being faithful to the depths of Jewish tradition.

The book certainly required a lot of revisions to achieve this balance. In early drafts, I leaned too heavily on visions and mystical wisdom, which I personally find fascinating but were often disruptive to the modern part of the story.  One thing that helped was to have the visions serve as foreshadowing hints toward the main plot. A lot of visions ended up being cut entirely, and a lot of mystical lessons shortened to the bare minimum to make the plot work – though I love to teach these kinds of lessons in more detail when I get the opportunity.

I think part of the reason the story works is because Rachel feels the pull from one part of her world to another through the characters that represent different parts of Rachel’s world.  For example, her friends Lauren and Maya ground her in her American secular life, whereas her Catholic neighbor and friend Chris is the most likely to believe her when she shares her prophetic powers.  On the other hand, her prophetic teachers, Yonatan, Rena and Devorah, have a power unlike any she has known, and they are also helping her deal with gifts that are almost overpowering for her.  In the story, Rachel’s mother also plays a unique role in helping her dance between both worlds.

Tell me a bit about the research you needed to do for this book. What creative liberties did you take to share Rachel’s journey?

From the outset, it was very important to me that the prophetic aspects of this story be grounded in Jewish tradition. I had seen other book series dealing with inspirational topics, like The Celestine Prophecy or Conversations with G-d, almost morph into their own religions, and I wanted no part in that.

I did a lot of mystical Jewish learning to make sure the story would be authentic, including reading quite a number of books by Rabbi David Aaron and Rabbi Aryeh Kaplan.  An incredible coincidence led me to the opportunity to learn with Rav Avraham Sutton a student of Aryeh Kaplan who posthumously published his last book, Inner Space. I also learned with several other Jewish mystical teachers, including Rabbi Doniel Katz and Rikva Malka Perlman.  But it was Rav Sutton who listened to the ideas for the book, to my own personal meditation experiences, and eventually specific scenes from the book, and branded them as authentic. His wife also read the book and gave me some important feedback.

I also did other kinds of research for this story.  An emergency room doctor read a beta version to give me feedback on specific medical scenes, and I interviewed a dancer to learn some of the specific challenges Rachel’s sister, Beth, might experience while pursuing a college degree in dance. I even interviewed someone at the University of Maryland to clarify what Rachel’s father (a professor there) might be like.

The biggest liberty I took, of course, was creating a secret community of Jewish prophets, when, to my knowledge, there is not one. Even more, I imagined that this traditionally observant community could be almost completely egalitarian. Men and women live and lead this magical community in complete partnership while being fully respectful of each others’ gifts.  I figured if I was going to create an ideal prophetic community, I’d go all the way.

What do you hope your readers take away from reading THE PROPHETESS?

After her Zaide’s death, Rachel finds a prayerbook he gave her as a child, with the inscription, “For Rachel. May she grow into all her gifts.” Rachel turns this into her own prayer, by asking G-d to help her grow into all her gifts. The theme continues throughout the story, as a young woman confronts personal gifts larger than she could have imagined, and must find a way to grow into them.

And isn’t it really that way for all of us? We have gifts that we’re growing into, and no matter how much we’ve done so far, if we’re alive there is still so much more we can learn to grow into our full potential. This is all the more so for women, who often live our lives in numerous phases with opportunities for ongoing growth throughout our journey.

Many young adults and women have found that The Prophetess has supported them in growing into their gifts. A young woman in Livermore, CA called the book “life-changing” and said it gave her a different perspective on my Judaism and how to look at problems. She recommended the book for those who are interested in discovering their true selves. Another young woman commented that this book will help you find your purpose in life. She said, “As a teen, I related to the characters and their daily struggles. I think that this novel is a must read. It has a great plot with interesting characters, and it always has you coming back for more. I couldn’t put it down.” The Prophetess has even been known to inspire a few boys!

I hope that The Prophetess will empower all its readers to grow fully into their gifts, and in so doing, become heroes and heroines in their own lives.

Evonne Marzouk has spent her career in pursuit of inspiring others, making a difference, and bringing Jewish wisdom into the world. She grew up in Philadelphia and began writing and publishing poems and stories as a young child. Evonne attended the Johns Hopkins University and received a B.A. from the Writing Seminars program, with a minor in Religious Studies. She has worked on a range of international policy and communications projects for two decades as an employee of the U.S. Environmental Protection Agency. From 2004-2014, Evonne founded and served as executive director of Canfei Nesharim (recently merged with GrowTorah), an organization that teaches Jewish wisdom about protecting the environment, and she co-edited Uplifting People and Planet, a collection of Jewish environmental core teachings, published in 2014. Her first novel, The Prophetess, was published by Bancroft Press in 2019.

Interview with Jeska Verstegen, author of I’LL KEEP YOU CLOSE

Interview with Valerie Estelle Frankel, author of CHELM FOR THE HOLIDAYS 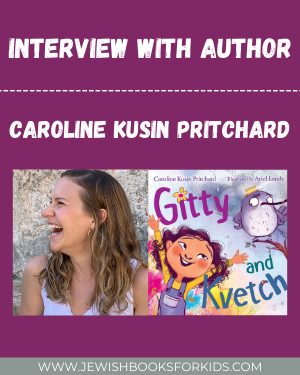 Interview with Caroline Kusin Pritchard, author of GITTY AND KVETCH