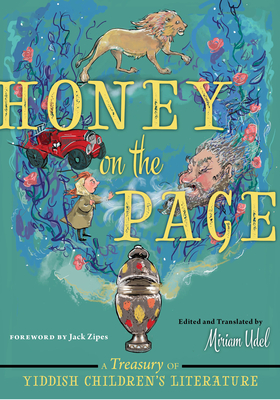 I am delighted and honored to welcome Miriam Udel. I first met Miriam when I attended the TENT program at the Yiddish Book Center. Miriam was one of our instructors and introduced us to Yiddish stories for children. As a teacher, Miriam is magical! I felt like an eager college student, so excited to learn from her. During TENT, I shared my birthday with another participant. Miriam led the group in a rousing Yiddish rendition of Happy Birthday to both of us it was AMAZING!

Miriam is associate professor of German Studies and Jewish Studies at Emory University, where her teaching focuses on Yiddish language, literature, and culture. She holds an AB in Near Eastern Languages and Civilizations from Harvard University, as well as a PhD in Comparative Literature from the same institution. She was ordained in 2019 as part of the first cohort of the Executive Ordination Track at Yeshivat Maharat, a program designed to bring qualified mid-career women into the Orthodox rabbinate. Udel’s academic research interests include 20th-century Yiddish literature and culture, Jewish children’s literature, and American-Jewish literature.

It is with tremendous respect and great affection that I share my interview with Miriam about her new book, Honey on the Page: A Treasury of Yiddish Children’s Literature with illustrations by Paula Cohen Martin.

Can you share a bit about your process getting started, then finding and translating Yiddish stories? I picture you as a treasure hunter, finding gems in hidden places.

This anthology took shape where two quests converged: a Yiddish language teacher seeking authentic materials for her second-semester students to read and a Jewish mother looking for texts that might transmit to my own children some of our values and the Yiddish cultural milieu that I study. When I found out that there was a whole corpus of Yiddish children’s literature that was scanned and freely available, but that few people knew about or were discussing, I felt like an ordinary spelunker who had stumbled into a glittering treasure cave. I decided to scoop up as much treasure as I could carry (or stuff into an anthology) and haul it back to the surface-world of English through translation.

Your research seems to involve not just the stories, but the authors, as well. What was that research process like?

I really expended most of my energy on the selection and translation and relied on existing reference works for most of the details about the authors’ lives. However, when it came to women writers especially, the biographical record was scanty. In two cases, those of Ida Maze and Rokhl Szabad (also known as Regine Weinreich and married to the eminent Yiddishist Max Weinreich), I was able to piece together brief biographies by reading the memoirs of their very literary sons, each of which featured a chapter about his mother and her influence. In the case of Malka Szechet, there was truly no written record, other than two slender holiday books she had published in Havana. A heroic Judaica librarian at the NYPL, Amanda Miryem-Khaye Seigel, spent the better part of a day conjuring her life from ship’s and flight manifests, social security records, and other ephemera. It’s all in a day’s work for her, but it was a wonder to me. Following circuitous routes of Googling (oysguglen in Yiddish) and relying on the Jewish Geography network, I was able to reach and eventually befriend Malka’s surviving son, a gentleman of youthful spirit who is, as he puts it, “38-backwards years old.”

That was by design, so thank you for noticing! In selecting the texts, I wanted to display the range—ideological, geographic, artistic—of Yiddish children’s literature. There is historical fiction, like the life of the medieval Bible commentator Don Isaac Abravenel, as well as short stories set in Casablanca and Trinidad: not the places you would first think of in relation to anything Yiddish! Taken as a body, these stories and poems also tell the story of how Yiddish-speaking Jews became modern. We see stories set in cosmopolitan Warsaw and New York, as well as those in enchanted forests and the more rural market towns known as shtetlekh. Some are “just Jewish,” while others are Zionist, socialist or communist in orientation. Usually, though, the artistic quality speaks louder than the political commitments of the authors.

I love the way you describe your vision for the book of parents and children reading together. So many of the stories have layered meanings. Is this something you kept in mind while translating?

We have a fancy word for it in children’s literary studies: bisemy, or “creating meaning on two levels.” Some of my favorite works in the volume, and the most fun to translate, are bisemic. Yankev Fichmann’s Lipe the Tailor spends a glorious Sabbath in a magical marble palace before returning home after sundown. An adult reader might wonder whether there is a “Little Match Girl” reading where we catch a glimpse of Lipe’s afterlife at story’s end, while the child accepts at face value that he returns home to his loving family. Moyshe Kulbak’s “The Wind that Got Angry” is the story of a blizzard, but I discern in it the story of a tantrum that must be allowed to blow over like a weather system.

What is the difference between a Yiddish Story for children and a Yiddish Folktale?

In general, when we talk about folktales, we mean stories that emerge out of a culture’s oral storytelling traditions, that might eventually come to be written down and collected. They often have dream-like or otherwise unrealistic settings and include instances of the supernatural. We certainly have many of these in Yiddish, and while they were often shared with children, they weren’t crafted specifically for a juvenile audience. In the early decades of the twentieth century, we see a lot of what I term “fauxktales”: stories written in the oral, folk-like style by an identifiable author. This “primitive” style can often be a somewhat unexpected feature of modernism. HONEY includes several stories like this, such as Shloyme Bastomski’s “The King and the Rabbi” or David Ignatov’s “The Red Giant.” But there are lots of other kinds of stories as well, including highly realistic ones like Sarah Liebert’s “Moe and Nicky” or B. Oyerbakh’s “Evie Gets Lost.”

Do you have a favorite story in the collection?

I love all my children and I love all of these stories! But just as we are often left with a fond afterglow when something has been especially difficult with our children (ah, that one finally learned to sleep through the night/read/defuse a tantrum, etc.), so too I have warm feelings where I feel like I overcame daunting translation challenges. The first time I translated Leyb Kvitko’s narrative poem about a boy who refuses to bathe, “Boots and the Bath Squad,” I didn’t even try to rhyme. It was too hard, and I wasn’t a confident (or competent!) enough translator yet. I just got down a faithful, plodding, prosaic translation. But when the rest of the book was finished and I’d learned a thing or two along the way, I returned to “Boots” and turned him into pretty bouncy rhyming verse in English. So I feel like that poem and I bonded very closely!

To learn more about Miriam, please visit her website at www.miriamudel.com and order your copy of HONEY ON THE PAGE!