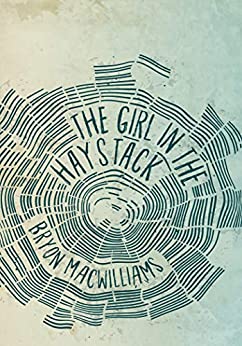 Bryon MacWilliams is an award-winning journalist who lived in post-Soviet Russia, where he was based for more than a decade as a foreign correspondent. He is the author of the memoir WITH LIGHT STEAM. His work, which also includes essays and poetry, has appeared in numerous publications. His new book, THE GIRL IN THE HAYSTACK, is a dark, yet tender story based on the life of a young Ukrainian girl named Lyuba. While hiding out with her family in the most dire circumstances, Lyuba has a deep connection with a dog named Brisko. Photos and other memorabilia bring the story to life. I was interested to find out the “story behind the story” about Bryon’s journey to create this story.

The Girl in the Haystack is based on Lyuba’s story. How did you come to know Lyuba? What is it about her story that moved you to write about it?

A friend of a friend knew a Holocaust survivor nearby, in Atlantic City, who was looking for help to tell her story: She was a young girl in western Ukraine during World War II and, now in her 80s, saw and felt the rise of intolerance in the United States – worried that Americans, especially young Americans, no longer knew stories like hers.

My memoir had just been published, and I thought I could help Lyuba – she’s since changed her name to Laura – write her memoir. But after early conversations it became clear that, while Laura’s memory is sharp for key moments, it’s less sharp for the in-between moments crucial to storytelling in a traditional memoir.

So I saw the story, but I didn’t see a way to tell it! Frankly, I wasn’t sure I was the best writer for the story…

… which was one of the things that moved me to write it.

Much in the story, itself, moved me – Lyuba’s perseverance, Pavlo’s hard-to-believe heroism, resistance in the Tuchin ghetto, the special bond between Lyuba and Pavlo’s dog, Brisko. But I also was moved by the processes of writing, even publication.

That is, the more I learned from Laura, and from my own research, the more I saw I was well-suited to tell her story. As a Moscow-based foreign correspondent I had reported from Ukraine, knew firsthand the particular terrain, tensions, around ethnicity, nationality, religion. I realized her story was among those described by Timothy Snyder in his book, Black Earth: “We rightly associate the Holocaust with Nazi ideology, but forget that many of the killers were not Nazis or even Germans. We think first of German Jews, although almost all of the Jews killed in the Holocaust lived beyond Germany. We think of concentration camps, though few of the murdered Jews ever saw one.”

Most Americans don’t know this. I didn’t – until my 30s, when I moved to Eastern Europe.

Then there was the business side of books. I learned that U.S. publishers, and literary agents, are moving away from Holocaust stories. I learned there’s even something called “Holocaust fatigue.” And I realized – as individual memories recede into the collective, and the last witnesses die – some stories were being lost, forever. That was moving.

Then there’s what moves, I think, many writers: Even though writing isn’t valued by the market, or even most people, you still have to stay generous. I mean generous with your time, your heart, your self. (I used to believe that being generous, big, would sort of inoculate us from smallness – but there aren’t any such contracts.)

It’s kind of a mystery, finding and staying in that space. But it’s very moving.

Did you need to do any research to fill in the blanks as you told the story?

I did a lot of research, as much as I could. While there’s black and white in the story, the story isn’t black-and-white: Truths, in general, are mostly gray. So I had to be sure of the facts for peace of mind, in order to take risks with the writing. I also had to be sure of facts for the book’s journey, as it were: Because the (his)story is so charged, and takes place in a part of the world where centuries-old events can be looked upon as if they happened yesterday, I knew some readers would be looking to find fault.

(Besides, it’s almost never good when something – especially a mistake of fact – stops a reader from turning the page.)

I speak Russian, read some Ukrainian; I can navigate online archives. I asked for, and received, copies of documents used by Yad Vashem, the Holocaust remembrance center in Israel, to designate Pavlo Gerasimchik and his family Righteous Among the Nations for hiding Lyuba and her parents. I consulted, too, with noted Holocaust researchers, scholars (some of whom endorsed the book). And when I needed help translating and transliterating Yiddish, help arrived.

There’s no such thing as a self-made book.

Did you collaborate with Lyuba as you were writing? What was that process like?

Laura didn’t want to collaborate – which, really, was a gift. She’s smart, very matter-of-fact. She knows what she knows, knows what she doesn’t know. Because we connected easily, I think, as people, she (en)trusted me. When I showed drafts to her she never once asked for changes. After the book was published all she told me was, “It’s beautiful.”

The farmer’s dog, Brisko, plays an important role in the story and his “voice” is very poetic. Can you tell me a bit about how you created the dog as a character?

It took me a long time, Barbara, to give Brisko a voice, to make him the second narrator. It took many drafts, dozens. I resisted because I mostly write nonfiction, and in the book Brisko – albeit a real dog, we have photographs – is imagination, or a recreation. (Pretty much the only times I truly indulge my imagination are when I write poetry!)

Storytelling is a puzzle – a matter of time, and the hard work of revision. And I needed a solution to a dilemma that had lingered ever since I knew the story should be narrated by Lyuba: There are things a reader needs to know that Lyuba, or a child her age, couldn’t know.

So what to do?

I didn’t want to create an all-knowing, omnipotent narrator. I didn’t think other characters would work especially well, either, as narrators. And I just was so moved by Lyuba’s relationship with Brisko – how she saw him not only as a guardian, but a guardian angel, even though they never once touched – that I gave myself permission to (try to) give Brisko a voice.

Even then I resisted because, while I wanted the book to reach middle readers, I didn’t want it to be a children’s book, per se. I didn’t want to go so far as to create an anthropomorphic animal; a close reader will notice that Brisko sees and feels, but doesn’t think-think.

The voice that showed up on the page sees a lot at once, is a bit breathless in recounting what he sees – talks in strings of sentences that I originally arranged in blocks of text, like the works of Portuguese writer José Saramago. (Brisko isn’t overly fond of punctuation, as it happens!) When I saw the Brisko chapters laid out, though, prior to publication, I thought they would be hard to read for middle readers. So I recast the Brisko chapters as prose poems, paid special attention to line breaks (the words and symbols on which the lines end) – which helped the chapters not only read easier, faster, but look better on the page.

Between the time I met Laura, started writing the book, found a publisher, then found another publisher (after the first press folded), the intolerance Laura hoped to alleviate by telling her story had broken out into violence across America, and elsewhere. It seemed – to me – that stories like hers could go a long way toward showing us ourselves through the lenses of the experiences of others. Yet it can be hard, painful, to read such stories – especially in times of tragedy, darkness. Readers bring expectations to Holocaust stories.

A poet friend told me she put off reading the book for these reasons. After she read it, though, she said she thought it was less about horror, and more about heart. Her words reminded me of something Carl Jung wrote in his book, Memories, Dreams, Reflections: “As far as we can discern, the sole purpose of human existence is to kindle a light in the darkness of mere being.”

There is darkness in The Girl in the Haystack. But there also is light.

There’s light in your work, too, Barbara. And I’m just really grateful that you’re helping to bring Laura’s story to the attention of valued readers, like yours, in Jewish Books for Kids.