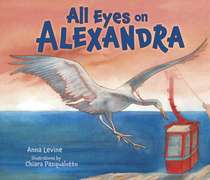 My friend Anna Levine has a new book – and it’s gorgeous! ALL EYES ON ALEXANDRA (Kar-Ben) tells the story of bird migration to Israel through the eyes of a young crane, Alexandra. Anna has captured the beauty of nature while seamlessly weaving in her own storytelling. Birds and their habitat are also featured in the breathtaking art by Chiara Pasqualott. I was delighted to have the opportunity to chat with Anna about ALL EYES ON ALEXANDRA.

Tell me what sparked your interest in bird migration? Was Alexandra inspired by a real experience?

Recently, an Israeli author friend asked me, “Is your life normally this serendipitous?” I’m not sure what the answer is except to say that I welcome the serendipitous moments which often inspire the books I write. In the blog interview for Barbara Krasner (The Whole Megillah) I related my experience of visiting Akko at sunset when a Hitchcock-like flock of thousands of birds flew overhead landing on electricity wires strewn between the crowded buildings of the market. The birds nudged each other aside to move and make room for the night. Their mannerisms were so delightfully human. Later, back home in Jerusalem, Chava (Kathe) Pinchuck who had recently immigrated to Israel got in touch and suggested we spend the day at the Bird Observatory in Jerusalem. “The what? Where?” Thirty years in Jerusalem and I’d never heard of it. In the hard-to-find patch of wilderness, tucked next to the Knesset, the birds find shade from the sun and protection from the rain and other animals. The dedicated staff who run the observatory study and track migrating birds. It took a new immigrant to Israel to introduce me to our urban nature oasis at just the moment I was imagining Alexandra’s story. Serendipity

I love that your books introduce readers to the wonders of Israel, in this case, the Hula Valley. What was your research process for All Eyes on Alexandra?

Living and writing in and about Israel means that I’m never too far to hop in the car and set out on an adventure. I love the hands-on experience, whether it’s participating in an archaeological dig (Jodie’s Hanukkah Dig), bird watching in the Hula Valley (All Eyes on Alexandra) or watching soldiers on their parachute jumps (Freefall). It’s a two hour drive from my home to leave behind the city’s bustle and enter the magical marshland of the Hula Nature Reserve. I’ll be going back in November during Hanukkah with the staff and students from the Bird Observatory. I need the visual and sensual experience to begin with. Then I interview the experts. People are happy to talk about what they love. I consulted with ornithologists, amateur photographers, and bird watchers.

Chiara Pasqualott’s illustrations are a perfect pairing for your prose. What was your response when you first saw her work? And what is the most surprising thing you discovered?

When I saw Chiara’s illustrations, my heart soared. Her talent breathes life into the text giving the birds human traits while staying true to their natural characteristics. Chiara lives in Rome and has never been to Israel. You asked about something surprising. This knocked me off my feet. It was important for Chiara to keep the birds as lifelike as possible. The challenge then, was how to single out Alexandra from the other cranes. Chiara chose to tie a string around Alexandra’s neck. A red string. Unbeknownst to Chiara, there is a Jewish folk custom often associated with followers of Kabbalah, who tie a red string, a kind of talisman, around their wrist as a way to protect against the evil eye. Serendipity? Or does Alexandra know something about herself that I don’t?

You write both picture books and fiction for older readers. How is the writing process different for you?

Picture books, like poetry, are to be read aloud, so rhythm, rhyme and cadence are the first three words which come to mind when I’m writing a picture book. Once I have the idea of what I want to write, I compose a rough draft. Then I stop, put the text aside and read poetry (Billy Collins is one of my favorite poets). With picture books, even though I don’t choose the illustrator, I have to trust that the illustration will not only complement the text but create its own story while filling in the gaps where the writing is sparse. For both PBs and longer works I write chapter summaries. Of course for the PB it’s much shorter, figuring out the twenty-eight page layout (though the illustrator will make her own choices) and for longer works, figuring out what I want to accomplish in each chapter.

Thank you, Anna – and Alexandra!

Learn more about Anna and her books at www.annalevine.org