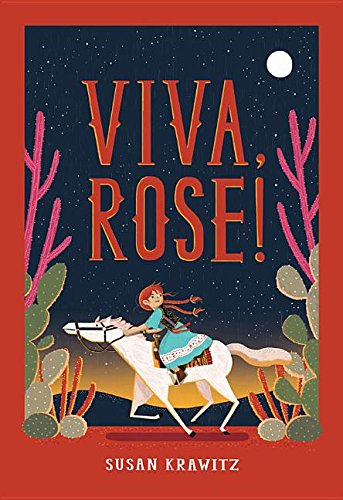 The history of the Old West is full of interesting figures. Jewish history of the Southwest is a passion of mine and I couldn’t wait to read Viva Rose! Author Susan Krawitz introduces readers to thirteen-year-old Rose Solomon, who discovers her older brother Abe, is in Pancho Villa’s army and she is determined to bring him home for Passover! Plucky Rose is an unlikely heroine and her story will appeal to the adventurous spirit in all of us!

Your new middle-grade novel, Viva Rose! was inspired by your own family. Can you share a bit about your family history?

When I was very young, whenever my family gathered at my great-aunt’s Brooklyn home for holidays, my uncle Sheldon entertained the kids by telling stories of a relative named Abraham who lived in San Antonio Texas. Just the fact that Abe lived in Texas was exciting enough, but the details of his life seemed like the stuff of tall tales. When Abe visited the east, he always dressed like a cowboy so he could pool-shark the locals at the billiards hall. He played chess on horseback. And craziest of all, he’d ridden with Pancho Villa’s army during the early 1900s Mexican Revolution.

The only thing that made me think these stories could be partly true was the fact that one of my great-aunts had a Mexican serape and a sombrero in her bedroom. But a Russian/Jewish immigrant who rode with Pancho Villa? Really? Abraham became a joke between my sister and me. I even gave her a T-shirt with a picture of Pancho Villa’s gang on it so we could choose one bandido to be our cousin. And then this sister, who happens to be a historian, took a trip to San Antonio, went to a library, and found an article in a 1932 newspaper that confirmed my uncle’s claims about Abraham, and told some new stories as well. In fact, the opening sentence was this: “Every once in a while you come across a life story that in its color and action seems almost fictional.” And for me, that was it–I couldn’t stop thinking about how to turn this cousin’s “almost fictional” life to actual fiction.

Dorotea and Rose have a prickly friendship. Is Dorotea modeled after a particular historic figure?

Yes, she is! So glad you asked this. Actually Dorotea is how I envisioned Pancho Villa would be, if he were a nine-year-old girl. Her name is a hint—Pancho’s real name was said to be Doroteo.

Villa was a complex person who defied easy definition. Was he a good guy? Was he a bad guy? Yes and yes. He felt genuine empathy for the plight of the badly-treated Mexican farm workers, and also seemed easily able to justify very cruel and heartless actions to his enemies, and also, sometimes, to those who thought he was their friend. I wanted to imbue a child character with a broad kaleidoscope of qualities in order to allow Rose, the main character, an up-close and personal confrontation with this kind of human complexity. Some of the things Dorotea did that Rose saw as unkind actually were not. But much of her actions were utterly self-serving. Dorotea, like Pancho Villa, isn’t easily definable as good or bad, but offers instead, all kinds of grey shades.

Pancho Villa is a legendary figure. In the process of research, what did you learn about him that surprised you?

I was surprised to learn that his bandit career had begun when he harmed (some say killed) the son of the wealthy owner of the farm his family worked because he’d attacked Villa’s sister. This initial act of lawlessness sprang from a desire to protect and avenge his family. Villa was often called a “Robin Hood” type of figure; he hurt the rich to support the poor, and this seminal youthful event was very clearly his “backstory wound.”

Viva Rose! is fictional, but based on historical events. How did you balance fact and fiction in your writing process?

Unexpectedly I found that the two worked integrally. I gorged on all kinds of research, but at the end of day, this was a novel, not a history book, and the facts had to serve the fictional story.

And it did in ways I hadn’t expected. Though the story engine was started by my uncle’s tales of family members, research offered the book’s true thematic heart. Especially Insurgent Mexico, a book by John Reed, a journalist who was embedded with Villa’s army, which focused on the human side of the Mexican Revolution. To my surprise and delight, this book showed incredible parallels in the struggles faced by the Mexican campesinos and my Russian Jewish immigrant ancestors. Both were trapped in an untenable system of peasant serfdom, poverty, and governmental aggression, and struggled (via immigration and revolution) to find a better way to live. These two very different cultures had far more in common than I’d ever expected to find. And if there’s one thing I hope that this book offers to readers, it’s the fact one person’s struggle is really everyone’s. In truth, we are all so much more the same than we are different. And in our currently partitioned and partisan world, I think this is a truth we can’t hear (or offer to our children) enough.

To learn more about Susan please visit her web site at susankrawitz.homestead.com