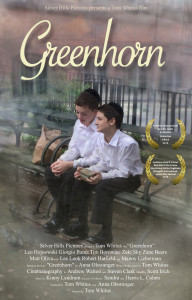 I am thrilled to share some terrific news. A few years ago I had the pleasure of interviewing Anna Olswanger and  Miriam Nerlove about their book, Greenhorn. Here is the link to our chat Greenhorn – The Book.

In 2014 Anna Olswanger co-produced a short indie film adaptation of the novel. Greenhorn is about a young Holocaust survivor who arrives at a Brooklyn yeshiva in the 1940s with only a small box that he won’t let out of his sight. Like the book, the film, which involves disabilities and bullying, is based on a true story. Please check out the trailer here: Film Trailer for Greenhorn Movie.

Don’t miss the opportunity to view this special film!

Enter your email address to be notified about new posts.

Apples, Apples, All Year Round