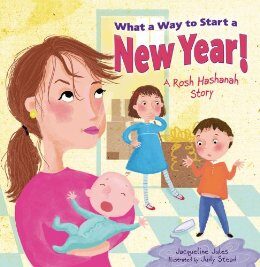 I was so excited to learn that my friend Jacqueline Jules had a new book about Rosh Hashanah. When she explained that the story had a 24-year history, I had to know more! I invited Jacqueline to share the “story behind the story.” Jacqueline’s journey is an inspiring way to start off our New Year!

WHAT A WAY TO START A NEW YEAR: 24 YEARS IN THE MAKING

I moved to Nashville, TN with my husband and two young sons in 1989. The first month was difficult. I missed my old synagogue in Pittsburgh where I felt a part of a community. So our family planned a car trip to see old friends. But on the morning of our departure, as my oldest son was brushing his teeth, the faucet handle fell off. My husband had to take care of the plumbing emergency before we could leave. Then we had a problem with the garage door closing properly. It seemed almost as if the house had a lonely ghost and was trying to keep us prisoner. We finally did get on the road but while we were driving, my husband and I recalled a series of other events that had gone wrong that week—a broken vacuum cleaner, car trouble, and other small problems with the new house. All of these aggravations had been compounded, of course, by the feelings of isolation and disorientation that inevitably come with a move.

That’s when an idea began to brew. Could I write a story about a family relocating to a new city? Could they try to visit old friends and have some of the same troubles my family just experienced? And could I make the story Jewish? While that particular move to Nashville in 1989 had not occurred at the High Holidays, I had moved before for my husband’s job. Once, had been right before Rosh Hashanah and the welcome we received from the synagogue had made our transition much easier. I remembered how my own parents had made a point of inviting newcomers to their holiday tables, and I was inspired. This was a topic I wanted to write about.

But it wasn’t so easy. The story went through more re-iterations than I could count. In one version, I actually had a ghost preventing the family from leaving the house to visit old friends. In another, I had Elijah visit and encourage the family to attend their local synagogue. Schmaltzy! Most of these versions were over 2000 words long, way too long for a picture book, so at one point, I tried making the story into a chapter book. Another failure.  The story became one of those manuscripts I kept in my drawer and pulled out every so often to try again. Then my editors at Kar-Ben said they were interested in a book about hachnasat orchim—welcoming guests. I decided to visit the story one more time to see if I could make it work. The result is What a Way to Start a New Year, 24 years in the making. In a recent conversation with my editor, I admitted that she saw one of the first versions of the manuscript years ago, but rejected it quickly. Sometimes, stories need a long time to percolate before an author finds the right combination of words. And persistence pays off. I have a list posted in my office called “Top Ten Reasons To Never Give up.” My favorite one is from an anonymous source: “Failure usually follows the path of least persistence.” And as I sit here with a copy of What a Way to Start a New Year in my lap, I am very glad I followed this advice.

Mazel Tov to Jacqueline and Shana Tova to all!