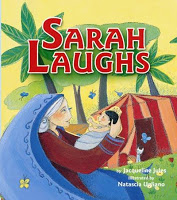 Jacqueline Jules has made some terrific contributions to Jewish literature for children, and it is an honor to share her interview on my blog. Jacqueline Jules is the author of thirteen children’s books including The Hardest Word (Kar-Ben), The Ziz and the Hanukkah Miracle (Kar-Ben), No English (Mitten Press), Abraham’s Search for God (Kar-Ben), and Sarah Laughs (Kar-Ben). The Hardest Word and Abraham’s Search for God were named Notable Books for Younger readers by the Sydney Taylor Book Award Committee. Sarah Laughs was named a 2009 Sydney Taylor Honor Book for Younger Readers. She is also a public elementary school librarian, who teaches weekly classes to students from preschool through sixth grade. The mother of two grown sons, she lives in Northern Virginia, with her husband, Alan, the webmaster for http://www.jacquelinejules.com/

Tell me a little bit about Sarah Laughs. Why you were drawn to write about this biblical matriarch?

To talk about Sarah Laughs (Kar-Ben, 2008), I need to talk a little bit about its companion book, Abraham’s Search for God (Kar-Ben, 2007). Both books are part of a Bible series I am doing for Kar-Ben Publishing. The original idea for Abraham’s Search for God came to me in 2001, when I was working as a synagogue librarian at Adas Israel Congregation in Washington, DC. One of the religious school teachers asked me for a book for young children on our patriarch Abraham. I couldn’t find anything suitable in the children’s collection. Since the library had an endowment for children’s books, I tried finding something I could purchase. Everything available had too many words and not enough pictures for young children. I realized that there was a need for a more child-friendly introduction to Abraham. That inspired me. My work as a librarian frequently leads me to the topics I choose to write about. Librarians love connecting readers with books. When I have no existing book to fill a request, I find myself itching to write one. Maybe I have an overwhelming need to please, but my creative juices start pumping when I see a need for something that doesn’t currently exist.

It took several years to get a book contract for Abraham’s Search for God. However, when Kar-Ben purchased it, they requested a book about Sarah as well. I agreed because my research into available children’s books on Abraham had taught me that there was a need for children’s book on the matriarchs as well as the patriarchs.

Sarah Laughs tells the familiar bible story of Abraham’s journey to Canaan, through his wife, Sarah’s, eyes. It imagines the thoughts that must have twirled in Sarah’s mind when Abraham told her they were leaving their comfortable home in Ur to go to an unknown place. Sarah had fears and concerns, but she was a true partner in everything her husband did. The story follows the couple through years of traveling in Canaan, ending with Isaac’s birth, when Sarah uttered her famous laugh.

I did extensive research for Sarah Laughs. My main sources, which are listed on the last page of the book are Biblical Images by Adin Steinsaltz; Etz Hayim Torah and Commentary edited by David Lieber; Daughters of Fire by Fran Manushkin; Legends of the Bible by Louis Ginzberg; Miriam’s Well by Alice Bach; Pentateuch & Haftorahs, second edition, edited by J.H. Hertz; Reading the Old Testament by Lawrence Boadt; Walking the Bible by Bruce Feiler; Wrestling with Angels by Naomi Rosenblatt. The Torah does not describe Sarah or her feelings in great detail, so I had often had to rely on midrash. As a librarian, research comes naturally to me. Librarians love digging up facts. And once I start researching a subject, it becomes an exciting adventure.

I can’t remember a time in my life when I didn’t want to be a writer. Long before I wanted to be a librarian, before I wanted to be a wife and a mother, I wanted to be a writer. I have always loved to read. Books took me to different worlds. They introduced me to interesting people. They were magical. The idea of creating something myself that gave me such pleasure was very appealing to me, even as child of nine. In third grade, when my teacher asked us all to put our career goals down on a strip of construction paper for a bulletin board, I wrote down “writer.”

In 1979, I got a BA in Writing at The University of Pittsburgh, becoming one of the first undergraduates of a newly established writing program. However, it was many years before I realized that most of the protagonists in my stories were young people and I should start marketing my work to children’s publishers. Some of the same stories that were rejected by adult publishers were accepted by children’s magazines. That’s when I began to focus on writing for children. A little while later, when I went back to school to become a librarian, I found myself mesmerized by the children’s literature courses. While I have worked as a Judaica librarian, serving both children and adults, my first love is for children’s literature, and I am happiest working in an elementary school library as I do now. I am a voracious reader, but I only read one or two adult books (outside of my research) a year.

Do you have any new books to tell us about?

I am excited to tell you that I have four new books out. Three of them are of Jewish interest. The Princess and the Ziz (Kar-Ben Publishing), the fourth book in the Ziz series, which began in 2001 with The Hardest Word, was released in September of 2008. This story is an extension of a tale about King Solomon’s daughter, in which I first encountered the gigantic mythical bird called the Ziz. In The Princess and the Ziz, the eager lovable Ziz takes the princess on a joyful trip around the world. But when she falls in love with a young man, the Ziz becomes jealous and problems follow. I have had a great time doing author presentations for The Princess and the Ziz. At some events, the kids have come dressed in royal costumes. We sing princess songs. To hear a little of the program and see the Ziz flying, please visit my website and watch The Princess and the Ziz book trailer, http://www.jacquelinejules.com/princess2.htm

The Princess and the Ziz was followed by a board book, Goodnight Sh’ma. http://www.jacquelinejules.com/goodnight.htm Even though board books are quite short, they are not easy to write because every word is important, and the rhyme must scan perfectly. My editor and I were absolutely thrilled when Jewish Living Magazine said Goodnight Sh’ma should become “a must-read bedtime story for Jewish babies.”

Benjamin and the Silver Goblet http://www.jacquelinejules.com/Benjamin.htm
was released in January 2009. It is the third book in the Bible series which began with Abraham’s Search for God. Benjamin and the Silver Goblet tells a story I have been enchanted with for years. When Joseph falsely accuses Benjamin of stealing his silver goblet, he gives his brothers the opportunity to abandon their youngest brother. Will they treat Benjamin as callously as they treated Joseph all those years ago? The brothers choose not to make the same kind of mistake they made before, thereby showing they have repented for their crime. For me, this bible story reveals the true meaning of teshuvah (repentance). Benjamin and the Silver Goblet, like Abraham’s Search for God, and Sarah Laughs are all PJ Library selections.

Finally, Charlesbridge Publishing released Unite or Die: How Thirteen States Became a Nation in January 2009. Illustrated by Nickelodeon Magazine comic strip artist, Jef Czekaj, Unite or Die dramatizes the conflicts and compromises of the 1787 Constitutional Convention in the form of a school play performed by exuberant young actors dressed as the thirteen original colonies. Please see the book trailer for Unite or Die at http://www.jacquelinejules.com/unite2.htm

What are a few fun facts about you?

In addition to reading and writing, I like to sing. Before story time in my school library, my youngest students and I always sing for about ten minutes. Some of the songs are from children’s tapes I listen to in the car, and others are ones I have simply made up. I also love puppets. I have a huge collection of them, including a Ziz puppet I asked an artist to make for me. My puppets love to kiss little cheeks as we sing songs in the library or at my author appearances.

My favorite color at the moment is purple. Two summers ago, I redecorated my bedroom with purple paint, purple carpet, purple bedspread, and purple sheets. Many of my clothes are purple including my winter coat and favorite earrings. I recently purchased a purple purse.

Jacqueline, it has been a delight getting to know you! For more information about Jacqueline or her books, visit her web site at www.jacquelinejules.com