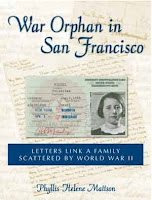 Phyllis Helene Mattson the author of WAR ORPHAN IN SAN FRANCISCO, a memoir based on her life as an orphan during World War II. Her father was forced to leave Austria, and her mother was unable to obtain the required paperwork to leave, but was able to find Kindertransport to take her daughter to safety. Phyllis was ten years old when she left her parents. She chronicled this period with letters she wrote describing her life, including her experiences in numerous Foster homes and an orphanage. Phyllis hopes that sharing her story will help a younger generation “learn about the struggles that some children have as the result of war.” Phyllis is a mother and grandmother, has been a member of the Peace Corps, and is currently a college teacher in Northern California.

You came to the United States when you were 10 without your parents. How did that happen? Why didn’t they come with you?
Father forced to leave Austria in 1939, mother didn’t have an affidavit, so she found a Kindertransport for me.

Tell us about the journey. Were you scared?
Mother had prepared me for it, and she promised she would soon be there.

You lived with an aunt, but only for a brief time. What happened?
I left my aunt’s because she had only planned to have me a short time, and she was very busy. I added a burden to the already small space and her husband was ill. So it was more for her reasons than anything I wanted or did. We remained in touch after I left.

What happened to your parents?
Father became a British POW (an error) and sent to Australia. Mother was sent to Germany twice to labor, then shipped to Minsk where she died.

How did your separation from your parents affect your life?
It made me very independent. I learned to plan for the things I really wanted, such as an education. I’ve had an extraordinary life, with many rewarding experiences such as teaching, traveling, service, and of course, many, many, friends to replace the family that I lost.

What are you working on now?
My China adventures.

What are a few fun facts about you?
I’ve traveled the world and just got back from 6th trip to China

What is your favorite holiday?
Thanksgiving and 4th of July

You can learn more about Phyllis and her inspirational story at www.StevensCreekpress.com.