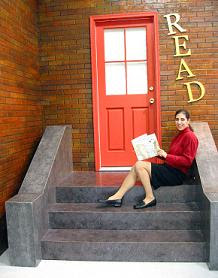 I’m delighted to welcome librarian Heidi Estrin to my blog. Heidi is the Library Director at a congregation in Boca Raton, Florida, presides over the South Florida Association of Jewish Libraries, and spent several years on the Sydney Taylor Book Award Committee. Heidi also hosts Jewish authors on her blog podcast, THE BOOK OF LIFE. It’s librarians like Heidi who put the right books in the right hands, helping children to become enthusiastic lifelong readers. Heidi’s dedication and passion for Jewish literature is evident in the all the work she does for the community.

Where did you develop your passion for Jewish literature for children?

When I first came to work at the library at Congregation B’nai Israel (www.cbiboca.org), I feared that I’d be stuck with a bunch of dry, didactic, dull old storybooks. I had the same impression of Jewish kidlit that many people have, left over from our childhoods when Jewish lit was more limited. I was amazed to learn that in actuality, Jewish kidlit is now as interesting, beautiful, inspired, and playful as any other literature! We’ve entered a sort of Golden Age in Jewish publishing, but many people don’t know it. That’s why I’m such a promoter for Jewish kidlit – I want people to realize that’s “it’s not your Bubbe’s library!”

As a librarian, what do you look for in books that you recommend to young readers?

I look for books that have heart. I want to see the author’s enthusiasm coming through the pages, and I want to see that the author and illustrator have honed their craft and worked hard to make their book the best it can be. I hate it when I feel like a book went to press before it was finished baking, so to speak. And although they have their uses, I’m not really into books that have an educational agenda. Too much like spinach, when what I really want is cinnamon coffeecake (to keep up with the cooking metaphore).

Are there any significant trends in the area of Jewish literature for children?

Why yes, thank you for asking, Barbara! I’ve just written an article about trends in contemporary Jewish children’s literature, and you can read it at www.MyJewishLearning.com! There’s also a great article there by my fellow librarian Linda Silver about classic Jewish children’s literature. Just to give you a quick overview, the biggest trend I see is that Jewish kidlit is no longer shy and no longer stuck in the shtetl. It’s getting more mainstream and more experimental.

What is your role in the Sydney Taylor Book Award Committee?

The Sydney Taylor Book Award Committee of the Association of Jewish Libraries selects the best Jewish kids’ books each year for younger, older, and teen readers. I was a reviewer on the Committee 2002-2005 and I was the Chair 2004-2005. When I “graduated” and Rachel Kamin took over as Chair, she had just had a baby, so I stayed on as a sort of assistant to help her out. This worked so well that we’ve officially decided that the Past Chair should always stick with the committee (in a non-voting capacity) to help with transitions and administrative stuff. So I’m still hanging around – they can’t get rid of me! If anybody needs info about the award, by the way, the best resource is www.SydneyTaylorBookAward.org. The next round of winners will be announced in January.

What books are “missing” from the genre that you would like published?

This is an important question, because Jewish kidlit tends to be lopsided. We have an overabundance of Holocaust-related books for older kids and teens, and quite a lot of books on Chanukah for younger kids. We need more books on lesser-known holidays, we need more non-holiday books about everyday Jewish life (especially from a non-Orthodox viewpoint), we need more (non-political and non-tourist-guide-style) books about Israel, and we especially need more books for preschoolers. Another project I’m involved with is the PJ Library (www.pjlibrary.org), a program of the Harold Grinspoon Foundation which provides Jewish books and music for families with young children. The PJ Library book selection committee has the hardest time finding quality Jewish books for kids under age 3, especially when you think of it in terms of these books competing for attention against titles like Don’t Let the Pigeon Drive the Bus, or No David! So we really need more authors and publishers to take up this challenge.

Tell us about your podcast, The Book of Life.

I host a monthly podcast (an Internet radio show) about Jewish books, music, film, and web resources. It’s like Fresh Air on NPR, only with a Jewish focus. It’s called The Book of Life and you can hear it at www.bookoflifepodcast.com. I interview authors, illustrators, musicians, librarians, and others involved in the Jewish arts. It’s probably about 50/50 between materials for kids and adults. I’ve been doing this for two years and I love it! It gives me a wonderful excuse to talk to all these creative people, a real treat for a book groupie like me! I also really enjoy the editing process, it’s like an audio version of doing arts & crafts.

Usually I create one episode per month, but in November I ended up with too much material so I created a Thanksgiving Shout-Out Special as a bonus episode. In December the theme will be Hanukkah, and will include an interview with you, Barbara, about your book Like a Maccabee! There will also be an interview with illustrator Ann Koffsky about her snowflake for Robert’s Snow (a cancer fundraiser) – I mention that now just because the snowflake auction deadline is coming up, so if you think you might want to bid on Ann’s beautiful snowflake “Jerusalem, City of Peace,” go to www.robertssnow.com, ASAP!

My favorite holiday is Passover. I like that it’s not about presents, but about storytelling. I like that there’s so much ritual involved, including the getting-ready-beforehand part. It has oomph. There’s a lot more “there there” to Passover than most other holidays.

Heidi, thanks for sharing your passionate perspective on Jewish literature for kids!