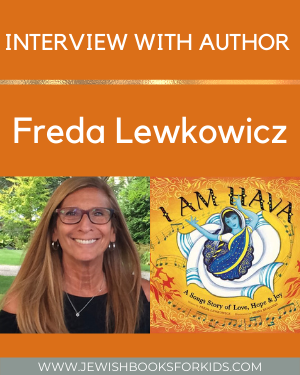 I’m so thrilled to welcome Freda Lewkow­icz, author of I AM HAVA: A Song’s Sto­ry of Love, Hope and Joy (Intergalactic Afikoman, 2021) illustrated by Siona Benjamin. The story is a beautiful, heart-filled tribute to the song we all know and love, Hava Nagila. The lyrical text takes readers through the creation of the song and its historical importance. The illustrations by Siona Benjamin bring a unique visual world to life and pair perfectly with Freda’s poetic style. More than a book, I AM HAVA is an experience.

What inspired you to write about Hava Nagila?

Several years ago, I read an article about the musical FIDDLER ON THE ROOF that described both its origins and its impact. This was definitely the first, tentative steppingstone to HAVA. Fiddler is based on Sholem Aleichem’s stories about Tevye the Dairyman and when I read about it, I realized that sometimes the stories behind the songs are just as magical as the songs themselves. I wondered if there were other songs as much loved as Sunrise Sunset and Tradition. I wondered what stories might lie behind these classic songs.

And so I began thinking and searching for iconic songs even though I have absolutely no talent when it comes to singing or playing an instrument. I discovered STRANGE FRUIT: BILLIE HOLIDAY AND THE POWER OF A PROTEST SONG by Gary Golio and Charlotte Riley-Webb. It’s a powerful song about the inhumanity of racism written by a Jewish immigrant, Abel Meeropol, and performed by Billie Holiday, the famed American jazz singer. Its lyrics and the story behind them inspired me to find a song whose meaning and history also needed to be explored. From then on, I was 100% committed to finding my perfect song and anthem.

And that’s how, after first experimenting with Hallelujah by Leonard Cohen, I found my way to Hava Nagila. When I discovered that there was only one picture book about Hava called COME, LET US BE JOYFUL by Fran Manushkin and Rosalind C. Kaye written in 2000, I knew that I had found my song. With Hava tugging at my heartstrings, I began my long and exciting journey to my publisher Brianna Caplan Sayres at Intergalactic Afikoman and Hava’s illustrator, Siona Benjamin.

I love the way you bring readers into the emotion of the song by the use of personification. Can you tell me a bit about how you came up with the idea to embody Hava this way?

I enjoy adding a twist to my picture book manuscripts when I can. I like trying to put a different spin on a popular idea or theme. I’d experimented a lot with different points of view, and so it was a natural step to use personification for Hava Nagila. I had written about anthropomorphic foods like lost latkes in a Hanukkah story or forlorn sesame seed bagels grieving because they’d been replaced by hipster bagels like blueberry or rainbow. I had experimented with objects like the alphabet. I had even adopted the point of view of a Leica camera for a non-fiction manuscript about the Leica Freedom Train. One of my favorite anthropomorphic manuscripts is a Holocaust story told from the point of view of many whispering walls starting with a shtetel in Poland and moving to ghettos and then finally and joyfully to freedom in the USA. I attribute my fondness for unusual points of view and personification to my many years teaching figures of speech to my students!

Although others had already used personification for food, animals and the Holocaust, I didn’t think it had ever been used for a song. And so I was ready to tell the story in the persona of Hava. Her journey from a niggun, a wordless melody, to her present-day iconic status and universal appeal tells such a fascinating story that she deserved a unique voice.

What was your research process for I AM HAVA?

My research began with Hava Nagila, the 2012 documentary by Roberta Grossman. The film describes Hava’s historical journey from the Sadagora in the Ukraine to Palestine and then to North America and the world. It includes the long list of singers, from Harry Belafonte to Danny Kaye, who have sung and recorded Hava Nagila. The Jewishness of the song is also explored in detail in the film.

I also discovered that the Museum of Jewish Heritage in Manhattan had a temporary exhibition called Hava Nagila: A Song for the People. It brought Hava to life and offered a few more details about her journey and the impressive list of artists who sang her joyful lyrics.

There aren’t many books about Hava Nagila and so I had to rely on newspaper articles and websites like My Jewish Learning and Tablet Magazine. Thankfully, I also found a plethora of post Holocaust pictures of refugees joyfully dancing the hora (Hava Nagila’s lifelong partner) on museum websites like Yad Vashem and the United States Holocaust Memorial Museum. I collected these photos. I imagined that they danced the traditional, celebratory circle dance to Hava Nagila, the iconic Jewish anthem. A perfect partnership, even in Displaced Person’s Camps in Europe.

What were your thoughts when you first saw Siona Benjamin’s unique illustrations?

Being matched with Siona Benjamin, who belongs to the Bene Israel community of India, is a blessing! How lucky I am that Brianna Caplan Sayres paired me with her. It feels like a perfect partnership to me, just like Hava and Hora!

Siona’s art communicates the diversity of Hava Nagila and there couldn’t be a better match. I had imagined Hava as female but I never saw her as blue-skinned and in the glorious shades of blue and white that Siona created in this tapestry. I never imagined her wearing a sari and representing the sky and the sea and the world. Siona opened my eyes even wider to the inclusiveness of Hava and all that she embodies. She brought the song’s history and soundtrack to life. Siona’s art shows us that Hava belongs to everyone and floats across borders, religions and cultures. Her delicate imagery shows us that Hava embraces everyone. What a perfect multicultural, inclusive message for the divisive present.

What does Hava mean to you?

My personal connection to Hava Nagila comes from the years following the Holocaust. My parents were living in Hasenhecke DP (Displaced Persons’) Camp in Germany in 1948. Not long before, cattle cars, powered by hatred, had rumbled through Europe and their families had stumbled toward gas chambers. Safe now, my parents were displaced persons. “Displaced,” as if someone had simply lost them. Like other Holocaust survivors, they were broken and in mourning. Yet the joyful sounds of Hava Nagila sometimes echoed in the camp. “Let us celebrate,” it urged. The song symbolized hope and resilience. Yes, the survivors could rebuild their lives, filled with the scars of memory but also overflowing with glorious freedoms. The astounding rate of weddings and births in the D.P. camps reveal this belief in a future. Singing and dancing and listening to Hava Nagila allowed my parents to believe that they could weave the threads of a new life in a new world. They could imagine that their tree of ashes could become a tree of life.

But there’s another connection I have as well. I embrace the memory of my daughter Sarah’s wedding a few months ago when we all joined hands and danced the hora while belting out the joyous words of Hava Nagila. And so these two connections, the present and the past bind me permanently to Hava Nagila.

Freda Lewkowicz was born and raised in Montreal, Quebec where she still lives. For 39 years, she taught English at Rosemere High School in Rosemere, Quebec. She was awarded multiple prizes for her work as a teacher including the Quebec Government Anne Greenup Award for her anti-racism classroom work and several Quebec Ministry of Education Awards for promoting reading. While teaching, she also worked as a freelance journalist whose work frequently appeared in The Montreal Gazette as well as in The Globe and Mail, The National Post, and The Ottawa Citizen. She is the author of three books. SCHOOL SELFIES: TEACHERS, PARENTS, STUDENTS AND BANDWAGONS was published in 2015. Her debut picture book, OLIVER SOLIVER was published in 2018. I AM HAVA: A SONG’S STORY OF LOVE, HOPE & JOY, illustrated by Siona Benjamin, was published on November 2, 2021 by Intergalactic Afikoman. In November 2021, Freda won a Silver Prize in the Astra International Picture Book Writing Contest for her story titled SONGS OF THE REFUGEE.