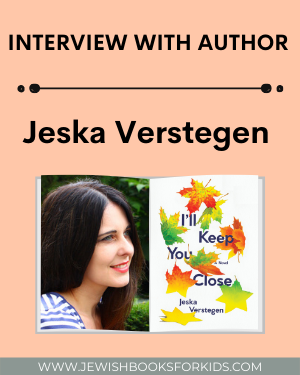 It is an honor to introduce Jeska Verstegen, author of I’LL KEEP YOU CLOSE (Levine Querido, 2021). The tragedies and atrocities of WWII have impacted generations of families. Inspired by her own real-life events, I’LL KEEP YOU CLOSE follows a young girl who goes on a quest to uncover family secrets when her beloved grandmother calls her by the name of a relative she’d never known. It’s a story of love, fear, and family connection. The book explores the emotional truths of intergenerational trauma in a deeply meaningful and accessible way. Translated by Bill Nagelkerke, I’LL KEEP YOU CLOSE is an emotional journey that will stay with readers.

On an interesting full-circle side note, Jeska is related to publisher Emanuel Querido who bravely published books written by German authors who were exiled by the Nazis. Publisher Arthur Levine named his company Levine Querido in honor of Emanuel.

I’LL KEEP YOU CLOSE is a book from your heart, based on your own life experience discovering your family was Jewish. What inspired you to share your story?

At a certain age I realized my upbringing was a bit different. Maybe because of my creative work, I started observing my own reactions very carefully. I am by nature rather analytic, so I tried to analyze where some of my basic feelings came from. I realized my upbringing had a great influence on who I am today. I thought I should acknowledge and cherish this family history, so I started writing. When I wrote, a lot of things that happened in the past fell into place; I was able to empathize more with everyone involved. It was some kind of urge to share this process with the world around me. A lot of people carry intense stories with them all through their lives and I felt it was so important to share and talk about it. Rather than keep quiet, as I used to do…

When you’re a child you internalize what’s happening around you. You feel the stress and the anxieties. But you know instinctively (without words) this is an issue too large to deal with. You just don’t understand why. Nobody really talked about what happened in our family’s past. People tried to live their lives and make the best of it. They kept the sad story hidden in a dark place in their mind. It’s like an echo, the story starts to resonate within you, it builds up who you are. All my family members have gone through this, I think. And the next generation too, but less so, maybe. That’s why talking about it is important.

What was your knowledge of the Holocaust before and after you uncovered your family secrets?

The difficult subject was avoided at home. The intense truth began to appear slowly. Hesje, the five-year-old daughter of my Grandmother’s sister, played a huge part in this process for me. Perhaps she became a symbol of the pain. Hesje’s death haunted my grandmother, mother, and other family members who knew her. For my mother, it was all too painful to talk about. She tried to protect us (my sister too) from the horrors that apparently could exist in people. Gradually I started to fit the pieces of the puzzle together. I understood why my mother distrusted people, for instance…

Can you tell me a bit about Emanuel Querido and your connection to him?

My grandmother used to talk about him with a certain pride. Reading was, and still is, very important in our family. I live nearby Emanuel Querido’s first publishing house. I walk by it once in a while. It’s meaningful to me. A ‘stolpersteine,’ a remembrance-stone of Emanuel and his wife, is laying in front of the house.

I love the old photographs I still have of him.

Is there anything you’d like to share that didn’t make it into the final draft of the book?

I’ve made certain everything that’s in the book is respectful to everyone involved in the story.

One of those stories I left out I can share: The story about my grandfather. During the war, he insisted that children chew each bite at least 32 times. Because food was scarce. It was Horace Fletcher who introduced this way of chewing in 1903. We call it ‘Fletcheren’ in my family; his last name became a verb in Dutch. Chewing 32 times on one bite is extremely difficult, by the way! You should try it!

What do you hope your readers come away with after reading I’LL KEEP YOU CLOSE?

I would like to invite people to talk about their feelings. It’s very important, I think, to talk and to really listen. And I feel it’s my obligation to keep this (his)story alive, we should not forget.

Always be alert, try not to judge people, try to empathize.

Jeska Verstegen is an author and illustrator living in Amsterdam. She is a descendant of Emanuel Querido, the revolutionary Jewish-Dutch publisher who was captured and killed by the Nazis in World War II. Jeska began her career in 1990 as an illustrator for magazines and children’s books. The white sheet of paper feels to her like a stage where you can perform any role, and one day she decided to paint pictures with words as well. Writing I’ll Keep You Close re-acquainted her with herself and also gave her a new color palette of diligently chosen words. I’ll Keep You Close is her debut novel, based on the true story of her own family history.