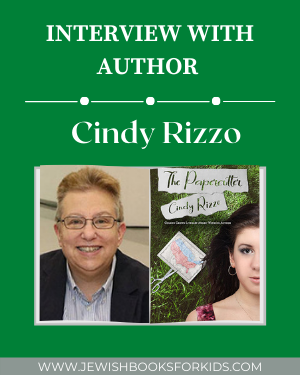 Welcome, Cindy Rizzo! Cindy’s new YA novel, THE PAPERCUTTER (Bella Books, 2021), is the first installment in The Split trilogy. The book takes place in the fragmented United States, separated into two nations —the God Fearing States (GFS) and the United Progressive Regions (UPR). It follows three Jewish teens­–Judith and Jeffrey, who live in the very conservative GFS, and Dani, Jeffrey’s pen pal, who lives in the progressive, diverse UPR. The teens take action and grapple with relationships, faith, identity, and what it means to be Jewish.

I am thrilled to interview Cindy about this fast-paced, engaging novel.

THE PAPERCUTTER is a Jewish Dystopian story and also a love story set against the backdrop of a divided United States. Can you tell me a bit about what inspired you to write it?

After the 2016 presidential election, I became more and more concerned about the growing polarization in the US. It felt like we were becoming two countries with separate politics, separate news sources, separate TV shows, and increasingly separate facts. In my most demoralized moments thinking about this, I wondered if the country shouldn’t just split in two. That “what if” question became the seed from which The Papercutter grew. As I wondered which populations would settle in each country, I worried that such a separation would split the Jewish community, with secular and more politically liberal Jews in one place and more Orthodox, Haredi and conservative Jews in the other.

Judith, Dani, and Jeffrey are unique and layered characters facing some serious challenges. When creating these characters, how did you balance their personalities, including their responses to these challenges, to move the story along?

Each has a different relationship to Judaism and to the context in which they live. Judith is devout and dedicates her art to her faith. She also has this mystical gift. Dani is like many teens, Jewish-identified but secular. And Jeffrey is pushing away from his faith, not because he doesn’t believe, but because he feels rejected and unable to be his true self. But as the story moves along, each becomes more nuanced from where they started out, as we all do as we mature. Their arcs as teens really interest me, especially as they are confronting external dangers. It’s important for me to balance the unfolding external events with the unfolding of each of these three characters, and be true to who each is as a 17 year old high school student.

Can you share a bit about your writing process? Did you have a carefully outlined plot or did the story flow as you wrote?

I wish I could lay out a plot ahead of time like other authors but it’s just not how I write. Sometimes plot points come to me at different times of the day when I can let my mind wander. Sometimes they come to me while I’m writing. Luckily I’ve learned that when I get to the start of the final third of a book, I can map out the plot through to the end. Now, with a trilogy it’s a bit trickier and I have had to think through where all of this is going across three books. So I’m getting a bit more disciplined in my plotting. I know how book two will end and where book three will begin. I also have a more detailed understanding of the arc of my three main characters. That’s a lot of progress for me as a writer, so maybe all I needed was to write a trilogy to move along in my evolution.

What do you hope your readers come away with after reading THE PAPERCUTTER?

I hope readers can appreciate the book from a number of angles–as an exploration of the relationships and identity development of a group of teenagers; as an examination of Jewish identity from a variety of perspectives; and as a cautionary tale about antisemitism and the need for resistance. Of course, I hope people find it a fun and inspiring read.

THE PAPERCUTTER is the first book in a series. What can we expect next?

I’m in the middle of writing book two and I’ve given myself the summer to finish the first draft. That’s ambitious, but I’m hopeful. I’d love the second book to come out in 2022. We’ll see. Book two continues to look at the gray areas that exist between two polarized societies and between various perspectives on what it means to live a Jewish life. The book also ramps up the danger for the Jews in the God Fearing States and, as in book one, includes teenagers taking crazy risks.

Thank you, Cindy. Best of luck with the trilogy!

Cindy Rizzo’s young adult speculative fiction novel, The Papercutter (Part I of The Split Series), was released by Bella Books in June 2021. She is the author of three previously published novels, Getting Back, Love Is Enough, and Exception to the Rule, which won the 2014 Goldie for Best Debut Author. Her short stories and essays have appeared in Unwrap These Presents, Conference Call, Language of Love, Our Happy Hours: LGBT Voices from the Gay Bars and on Medium.com. Cindy lives in NYC and works in social justice philanthropy.