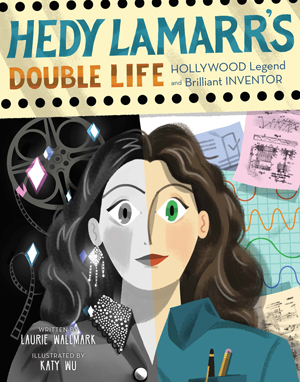 I’m excited to welcome Laurie Wallmark to chat about her book, HEDY LAMARR’S DOUBLE LIFE – The Hollywood Legend and Brilliant Inventor (Sterling Children’s Books) illustrated by Katy Wu. It’s a truly fascinating story of a movie star whose inventions changed the course of the world. Not only is Hedy’s story interesting and inspiring, but will lead to discussions about celebrating talent and passion, especially for young women. Laurie is the author of several award-winning STEM picture books about women, illuminating their contributions to our world for young readers.

Tell me what inspired you to write about Hedy Lamarr? How did you discover her story?

I don’t remember when I first found Hedy was an inventor as well as being a famous movie star. Once I did, though, I knew I had to write her story. I wanted kids to know that you didn’t have to choose between seemingly different character traits. For example, like Hedy, you can be both glamorous and smart.

What were some of the challenges that you faced doing research about Hedy’s inventions?

Like with all biographies I’ve written, one of the biggest challenges in research is getting contradictory information from different sources. Thank goodness for research librarians.

What was an unexpected fun fact that you discovered that was not included in the book?

When she and co-inventor George Antheil first described their invention to the National Inventors Council, they compared the way it worked to a player piano. The people on the council at first rejected it, because they didn’t think a player piano could fit inside a torpedo. Hedy and George had to explain that there wouldn’t be an actual piano.

Hedy had conflicted feelings about her Jewish identity. So much of her life was secretive. Can you share your thoughts about this?

Hedy was not a practicing Jew, and I think she realized that it would be better for her career to not advertise that she was Jewish. Hedy was fiercely devoted to the war effort, though, raising money and entertaining the men in the armed forces. In addition, she could never forget that her mother was stuck in Austria. Hedy and worked tirelessly and eventually helped her mother get out.

I love how the pull-out quotes are juxtaposed with the text of the story. Was that something you planned or was it a design decision by your publisher?

In my previous picture book biography, Grace Hopper: Queen of Computer Code, I also had quotations as part of the artwork. When I had originally written that book, I put the quotations in the back matter. I then realized it would be more interesting to kids to see her sayings as part of the story. It worked so well with that book, that I did it again with Hedy and also my book coming out in March 2021, Code Breaker, Spy Hunter: How Elizebeth Friedman Changed the Course of Two World Wars.

What were your thoughts when you saw Katy Wu’s illustrations? (I think they are terrific!)

Katy’s illustrations are so kid-friendly. When I’m at book festivals, it draws them in immediately.

Thank you, Laurie, for celebrating so many women and their contributions!

Learn more about Laurie and her book here: www.lauriewallmark.com