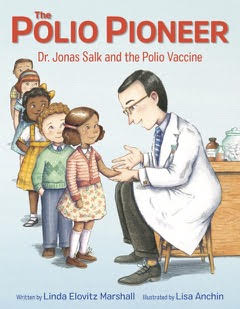 I’m so happy to welcome Linda Elovitz Marshall. Linda is the author of many beloved books for kids. Her recent picture book, THE POLIO PIONEER (Knopf) beautifully illustrated by Lisa Anchin, tells the inspiring story of Jonas Salk and his journey to create a cure for polio. Linda brings Jonas Salk to life for young readers who may be learning about his important work for the first time. Linda also offers young readers an insight into the terrible disease that greatly impacted a generation. Today’s kids will surely find parallels with life today. Linda portrays Salk as a thoughtful young man with a meaningful connection to his Jewish life. There is so much to learn from this lovely book. I was excited to chat with Linda about THE POLIO PIONEER!

In your author’s note, you mention that you always admired Jonas Salk. What inspired you to write about him now?

Dr. Jonas Salk has always been one of my heroes. His is a story of hope, a story of perseverance, a story about a child of an immigrant family, a child who saw things differently….and the good he brought to America and the world.

A few years ago, I realized that there are now very few people who remember polio. Hardly anyone now can recall the fear that catching polio – that just the word “polio”  – carried. Fortunately, Dr. Salk and his team discovered a vaccine for polio. This dread disease has since been almost entirely eradicated.

As for me….I remember polio all too well. As a child, I was not allowed to go to the movies, to sleepovers, or to swim in a local lake – all for fear of polio. These restrictions may sound eerily familiar now. But months ago – pre-COVID-19 – those fears and restrictions would have seemed laughable or, at least, as if they were from a long ago time and far away place.

What were some of the challenges that you faced doing research and writing about Jonas Salk’s work?

In THE POLIO PIONEER, I introduce several concepts that may be new to readers: e.g., virus, vaccine, polio. It’s important to me to communicate these concepts clearly and accurately to my young readers (and to my older readers, as well).

What was an unexpected fun fact that you discovered that was not included in the book?

Dr. Jonas Salk’s son, Dr. Peter Salk, proofread my text to help ensure that everything is accurate. It was so much fun working with him! I didn’t know him, but when I started the project, I reached out to him to let him know about it. He was so very helpful!

I love the spread of the Salk family celebrating Shabbat. How did his Jewish identity influence his work with vaccines?

Thank you. I love that spread, too. It’s a good question but not one that I pursued in my research.  I can only speculate that his desire to make the world a better place – his desire for what we call tikkun olam – might have been an influence. Certainly, he was distressed when, as a child, he saw wounded soldiers returning from war…That made a powerful impression on him. He cared deeply about people and about the world we live in.

What were your thoughts when you saw Lisa Anchin’s illustrations?

From the first moment I saw them, I absolutely, positively loved Lisa Anchin’s illustrations. She brought life and lightness to the story – taking a serious topic and making it attractive to young readers. I’m delighted by the research and work she did to make sure the story is told as accurately in pictures as it is in the text. She did a wonderful job!

Thank you, Linda! Wishing you and THE POLIO PIONEER all the best!

Learn more about Linda and her other books here: www.lindamarshall.com.