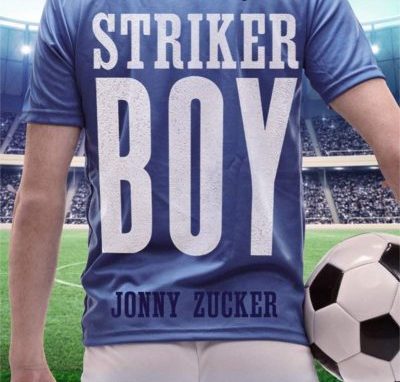 In STRIKER BOY by Jonny Zucker, Nat Levy and his dad have returned to England after traveling the world. Nat, a 13-year-old soccer player stumbles into a lifetime opportunity to play for a professional soccer team, The Hatton Rangers. But this dream-come-true has a price. Nat and his dad have to lie about Nat’s age. Then, Nat discovers he may not be the only one on the team with secrets. Will he be able to solve the mystery of the Hatton Rangers without putting himself in danger? STRIKER BOY is a terrific, engaging read, especially for sports fans. Readers will cheer for Nat as he stands up for himself, his team, and his family.

Sadly, author Jonny Zucker passed away in 2016. Jonny, who grew up in London, wrote over 50 books for kids. He leaves behind a meaningful legacy for young readers everywhere. I’m honored to welcome Jonny’s wife, Fiona Starr, who continues to shine a light on Jonny’s work.

STRIKER BOY is part sports story, part mystery. Nat is living out a fantasy that many young soccer players will envy – a young player (too young) on a professional team. Can you tell me a bit about Jonny’s inspiration for the story?

Jonny was a massive football fan and followed the North London team, Arsenal since he was a young boy. It was his older sister, Naomi, who first got him interested in the team. When he was old enough, Jonny would make the journey to the Highbury Stadium in Islington, North London, to watch live games. Back in the 1970s, it was standing only, and he told me there was often lots of fighting on the stands and it was just normal to see a punch up right in front of your own eyes. That would never happen now.

Anyway, I think the inspiration for Striker Boy came from this passion for Arsenal and playing football himself, combined with his job as a father of three sons with all the footballing frenzy this brings. I know that at the time of writing Striker Boy, our three sons were quite young, and Jonny would read stories to them. Some of them were football stories like GOAL and books by Tom Palmer. So I think all of this inspired Jonny to try his hand at writing his own footy book.

I think the relationship between Nat and his dad is really touching and I guess this was based loosely on his relationship with his own father and his own relationship with our three sons. He told me that his dad worked extremely hard as a barrister and judge lots of the time, but in the holidays they would go for month-long camping trips, and whenever possible Jonny’s dad would always find time to play football in his back garden whenever he could, and Jonny loved those moments. I am guessing the relationship with Nat and his dad is rooted somewhere within that. As for his own sons, Jonny would love nothing more than a kick about with them in our small back garden, our local park, or when we were away camping. So I guess the Nat father-son relationship is some combination of all of this.

Was Jonny a soccer (football) player or a fan?

Absolutely yes! However, I know that he had a fallow period for about four years when he lost his passion for a bit. This was when Jonny was in his early 20s and studying at Manchester University. At this time of his life he got interested in politics, music, youth work, and other creative stuff.

In the book, Nat and his Dad have a tender relationship, with a shared loss of Nat’s mother. It’s an emotional foundation for an otherwise action-packed story. What are your thoughts about the father-son dynamic?

I absolutely love the father-son dynamic and, as an ignorant footballing widow (now literally) and as a clinical psychologist, this aspect of the book really grabbed me and kept me engaged form the very first time I read the first draft on loose leaved paper. I often wonder where this part came from in Jonny’s mind, we did discuss a little too. So in part, I know he was inspired by the author, Roald Dahl. The children in Dahl’s stories often had tragic family circumstances – like JAMES AND THE GIANT PEACH, CHARLIE AND THE CHOCOLATE FACTORY, and so on. And I know that Jonny and our eldest son, Jake, loved reading DANNY CHAMPION OF THE WORLD together when Jake was small. In this touching book Danny and his father also have a very tender relationship. So I think this was one of the ingredients that created the STRIKER BOY inspirational magic. On the Roald Dahl note, by the way, Jonny’s own mum took him to see Roald Dahl speak in a local children’s book shop when he was a boy and this also inspired him from that very early age.

Can you share what Jonny would want readers to know about him and what he would hope they take away from STRIKER BOY?

I think Jonny would want readers to know how passionate he was about reading and teaching and how he listened to the voices and wisdoms of children who are often not heard because they are seemingly too small!

He would want readers to follow his example of living a kind life and of being warm and thoughtful to everyone they meet, and to help whoever and whenever they can. I know he would say that as long as boys and girls are reading something, it doesn’t matter what, then this is the best thing they can do and that there is nothing better than getting lost in another world and another story with the written word and some individual imagination. He would also want readers to give writing a go themselves. I know this because Jonny spent a lot of time visiting schools and inspiring children to write their own stories. I saw him do this on many occasions and he was really great at it. I think he would want readers to share his passion for reading. Also, despite his loss of hope in the end of his life which lead him to take his own life, due to his serious mental illness, I think the story of STRIKER BOY shows how Jonny believed in hope and in beating adversity, against all odds. Hooray for that!  Finally, knowing him as I did, I don’t think he would object to a little rule-bending either ( like Nat being too young for the squad really) as long as it wouldn’t hurt anybody and the outcome is good!

What about Jonny and his work inspired you most?

Jonny inspired me as a human first. As I have said elsewhere, he really had a unique capacity to make everyone he met, from milkman to Mayor feel special and to feel like his very best friend. In all my 53 years on this earth and having met hundreds of people, I  have never seen this ability in anyone else. So I do feel lucky to have been together with him for 25 years! He used his humour to make things feel light and bright and he was always engaged in another new project. For example, as a young man he taught himself guitar, he taught himself magic and juggling and tried his hand at stand-up comedy and drawing cartoons and on and on. Who knows what new skills and creations he would have developed right now in lockdown?  In terms of his work, I was always inspired by how he connected with kids in schools, as I said earlier. But on top of that, I was completely in awe of how he could dream up new characters in an instant! I used to tell him that frequently after reading a new draft of a story. Without any effort at all, Jonny could turn a blank page of paper into a whole new world of vivid characters, meaningful relationships, and page-turning action…you can’t ask for more than that in a children’s author.

A bit about Fiona and Jonny:

Fiona Starr was the wife of Jonny Zucker for 19 years, although they were together for 25 years in total. They met through an international Jewish youth movement called Habonim Dror. They studied at Manchester University (England) together. The first mainstream book that Jonny wrote was actually with Fiona. It was called DREAM THEMES and the next was called DREAM DECODE. Following this, Jonny’s writing career grew. Fiona worked as a clinical psychologist with children and also as an associate professor at a North London University. The couple has three sons.

Since Jonny’s death, Fiona has focused on teaching rather than clinical practice and she gave a Ted x talk about resilience last year. Jonny suffered episodes of severe anxiety and depression throughout his adult life and very sadly he took his own life in 2016 just before his 50th Birthday. Fiona says, “We miss him deeply.”

Fiona, thank you for sharing your lovely insights about Jonny and his work. May his memory be a blessing.