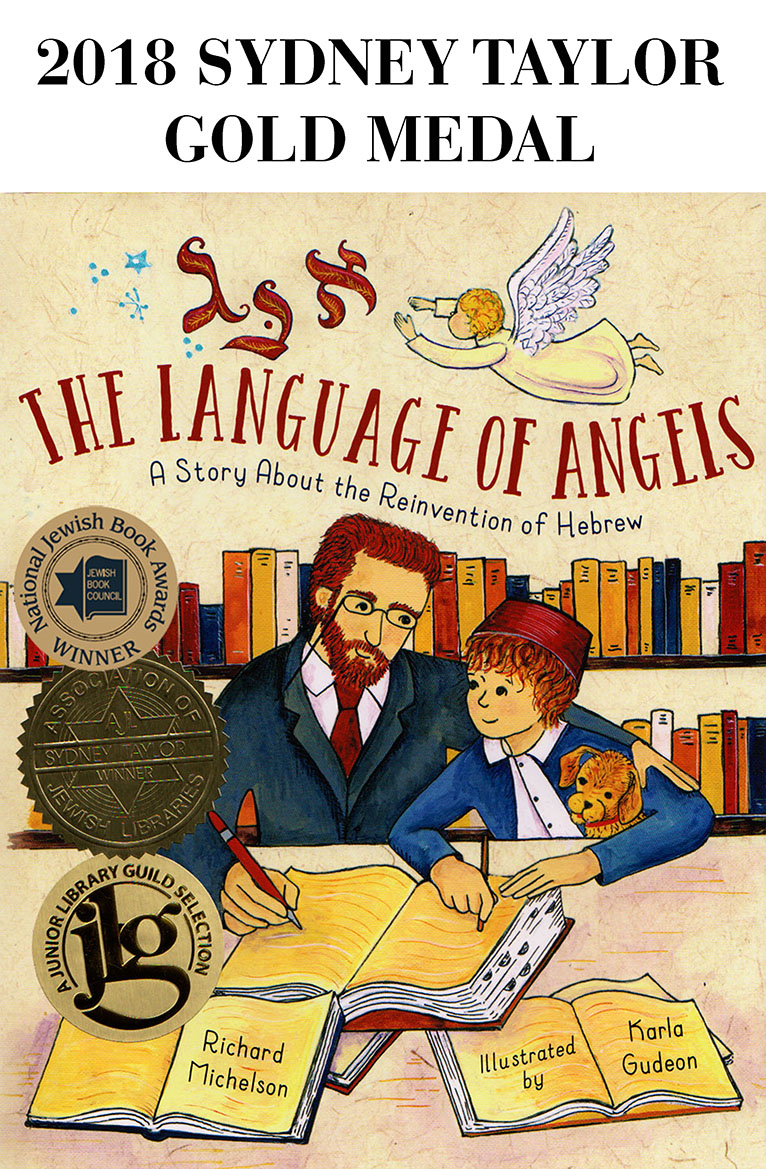 I am delighted to present this year’s winners of The Sydney Taylor Book Award for Younger Readers, Richard Michelson and Karla Gudeon, the author and illustrator of The Language of Angels: A Story About the Reinvention of Hebrew (Charlesbridge Publishing). The STBA committee says, This beautiful picture book tells the story of how Hebrew became an everyday language in Israel, after being out of use for two thousand years. The folk art illustrations are an illuminating match.

It’s an honor to chat with Richard and Karla about the creation of The Language of Angels.

Rich, you provide some fascinating details in the telling of Eliezer’s quest to create modern Hebrew. What sparked your interest in Eliezer and how extensive was your research?

In 2001, while collaborating on Too Young for Yiddish, illustrator Neil Waldman and I were discussing Isaac Bashevis Singer’s claim that Yiddish was the only language without a word for “armaments.” I asked Neil his thoughts about whether the culture informs the language or the language informs the culture. I don’t recall our conclusions, but during that lunch, Neil mentioned Eliezer Ben Yehuda and his quest to make Hebrew the daily language of the Jews.  I was fascinated. I had never heard the story, and to me, Ben-Yehuda was no more than a street name in Israel. How do you reinvent a language that died out in daily use almost two millennia ago? How do you make up names for everything new that came along in 2000 years– ice cream, bicycles, libraries? Imagine going to Italy today and convincing everyone to speak Latin –and succeeding within a couple of generations! I love words, and as a child, I thought Adam must have had great fun naming all of the animals. It never occurred to me how much work that would entail.

Neil said: “I was going to write Ben-Yehuda’s story, but couldn’t find my way in. I now give you the idea as a gift.” I read everything I could on the subject (my bibliography is listed in the back of my book) but abandoned the project – also unable to find a way to make the story accessible for kids. More than fifteen years later, researching my book Fascinating: The Life of Leonard Nimoy (2017 Sydney Taylor Silver Medal—thank you AJL!)  I went to a Star Trek Convention where a father had his son speak to me in Klingon. How crazy is that. The kid was 4 or 5 and didn’t speak English. What kind of meshugganah father teaches his kid to speak Klingon instead of English? Then I remembered Ben-Yehuda.  I’d found my way into the story.

Karla, your art is such a lovely accompaniment to the rich text of the story. What was your first response when you read the manuscript? How much research did you need to do to create the art?

Truly, my first thought was I’m so honored that Rich hand-picked me for this project and what a terrific opportunity this is to work with my phenomenally talented, funny, & yes, incredibly handsome friend Rich Michelson. I feel Rich could make a fascinating book out of any topic, but one that deals with Hebrew and etymology was of particular interest to me. Growing up, if I was to feel an integral part of family gatherings, I needed to become a wicked good scrabble player. Words were everything. My grandmother was notorious for knowing obscure, wonderful “scrabble words” so much so, that we would hesitate to challenge her when we weren’t sure if a word was actual or invented by her. Part of the “fun” was finding out at the end of the game, which words were real and which were bluffs. We had to become experts at discerning why a word might be a word. I love combining text and clever titles with my art, the act of illustrating, and now illustrating a text ABOUT text was a dream come true.

As far as research goes for the artwork, I relied on tried and true methods, books, questioning, and the almighty google images. Rich provided me with some valuable background material, I found some source images on my own through books and photographic imagery. I asked my favorite Hebrew experts, my step-father Marvin Antosofsky, a learned Rabbi & Cantor, and childhood Jewish sleep-away camp friend, Cindy, a superintendent of Jewish Day Schools for any background info they might have that could inform my pictures.

I loved learning about Eliezer Ben-Yehuda and his relationship with Ben-Zion. Like Rich, I am not fully comfortable with the way Eliezer used his own child to further his personal goal. However, I did find I found joy in thinking about the excitement of creating and forging the Hebrew language together as a family unit. The younger of my two grown sons, Max (21), often takes an oppositional viewpoint to my own, when discussing politics and world events. He likes to remind me how important it is for him to form his own opinions.  He claims I tried to force him to lean very, very, very far to the left. While he is a predominantly liberal thinker, he says that he would have liked to have had more opportunities to come to his own conclusions. Rather than the example he gives of growing up with a mom that prompted him at 8 years old to answer the question “Do you think there is there anything you can do that your mom wouldn’t forgive you for?” with the answer, “Yes, marry a social conservative.” My point is, I think all parents at some point force their own agenda on their children. Eliezer Ben-Yehuda just did that to a different degree.

Rich, Eliezer’s son, Ben-Zion is isolated from other kids because of his father’s insistence that he only speak Hebrew. Although Eliezer’s plan ultimately found success it seems Ben-Zion paid a price. What are your thoughts about Ben-Zion’s sacrifice?

Had I lived at the time, I’d have certainly joined the rest of the neighborhood in considering Ben Yehuda a child abuser. He put his dream of a common language for Jews ahead of his family’s well-being. Does one need that kind of drive to succeed as he did? It is one thing to sacrifice your own life, but to experiment with your child!  He wanted his son to be the first native Hebrew speaker in modern times—and he would not allow him to hear any other spoken language (he even covered Ben-Zion’s ears when animals were nearby).  I’d have had a difficult time finding any sympathy for Ben Yehuda and writing this story if not for Ben-Zion’s own later writings, which emphasized his love of his father. Ben-Zion became a man of words himself -an author and a journalist–and furthered his father’s vision. He renamed himself Itamar Ben-Avi—Son of my Father.

Karla, can you tell me a bit about your artistic process, what medium you used, etc.? Were you able to collaborate with Rich at all during the process?

My artistic process for illustrating a book is both solitary and social. I like doing all the initial brainstorming by myself. I say brainstorming rather than sketching, because I like thinking and mapping the book out in words and concepts before even sketching. In this initial phase, I’ll list and describe my ideas for what I think compliments the language page by page.

With book illustration, the illustrator isn’t always able to consult with the author. Working with Rich directly for years and knowing him so well gave me the invaluable ability to call and e-mail and refine my concepts to better suit the text.

My illustrating process has changed a great deal over the years. Where I used to sketch, re-sketch, erase, start again, trace, back-trace etc. I now start with a combination of sketching and making compositional collages.I combine my own characters and designs with imagery I cull and put the composition together in photoshop so I can “see” the overall composition and elements of the piece along with the text. Once I’m satisfied with the composition I then print the page and rework the piece with #2 pencil “Karla-fying” the entire image.

I am incredibly fortunate to have fabulous friends, relatives, and a studio team that I can rely on to give honest critiques and feedback through all the stages of my process

Often, I’ll redraw parts after my brother Adam Gudeon, an artist/author/illustrator and studio team provide their critique and we discuss the pieces. Once the final drawing is set, I ink the line work and work out a general color palette for the book which I execute with watercolors.

Rich and Karla, what is the most interesting or unexpected thing you have learned in the process of creating and publishing The Language of Angels?

R: The story itself is so interesting and amazing that everything blew me away. But I was very surprised to learn that, while most Jews living in Jerusalem at the time shunned Ben-Yehuda, he found common cause with many of the native Arabs living in what was then called Palestine. Ben-Yehuda delivered a lecture at the Arabic Academy of Science and told his audience about the close relationship between Arabic and Hebrew. He explained how he had borrowed many words from Arabic and that some Arabic words had been borrowed from Hebrew. Most Arabs respected Eliezer and were pleased to hear their “sister tongue” spoken in the markets. Ben-Yehuda believed that Jews and Arabs were mishpacha— family—and should share the land and live together.

And here is a side tidbit which occurs after the book’s timeframe. Just as Ben-Yehuda wanted all Jews to speak a common language, Ben-Zion wanted all people to communicate directly, and so championed Esperanto. In 1966 Hollywood produced Incubis, a (terrible) feature filmed entirely in Esperanto. It starred a pre-trek William Shatner.

K: I was surprised to learn that there was a sizable portion of the population not only at the time that objected to Hebrew becoming the language franca, but that there are still people that feel this way. That Hebrew is the holy tongue and shouldn’t be used for the mundane, it should be spoken and written only for prayer. Prior to The Language of Angels, I hadn’t made the connection that this is why some Hasidic sects speak only Yiddish, not Hebrew. Meshugge, right?!?!

Thank you, Richard and Karla! Congratulations to you both!

The full schedule for The Sydney Taylor Book Award Blog Tour is posted on the AJL blog.  To learn more about AJL please visit the  Association of Jewish Libraries website. The list of STBA winners, honors, and notables, can be found at the official Sydney Taylor site.