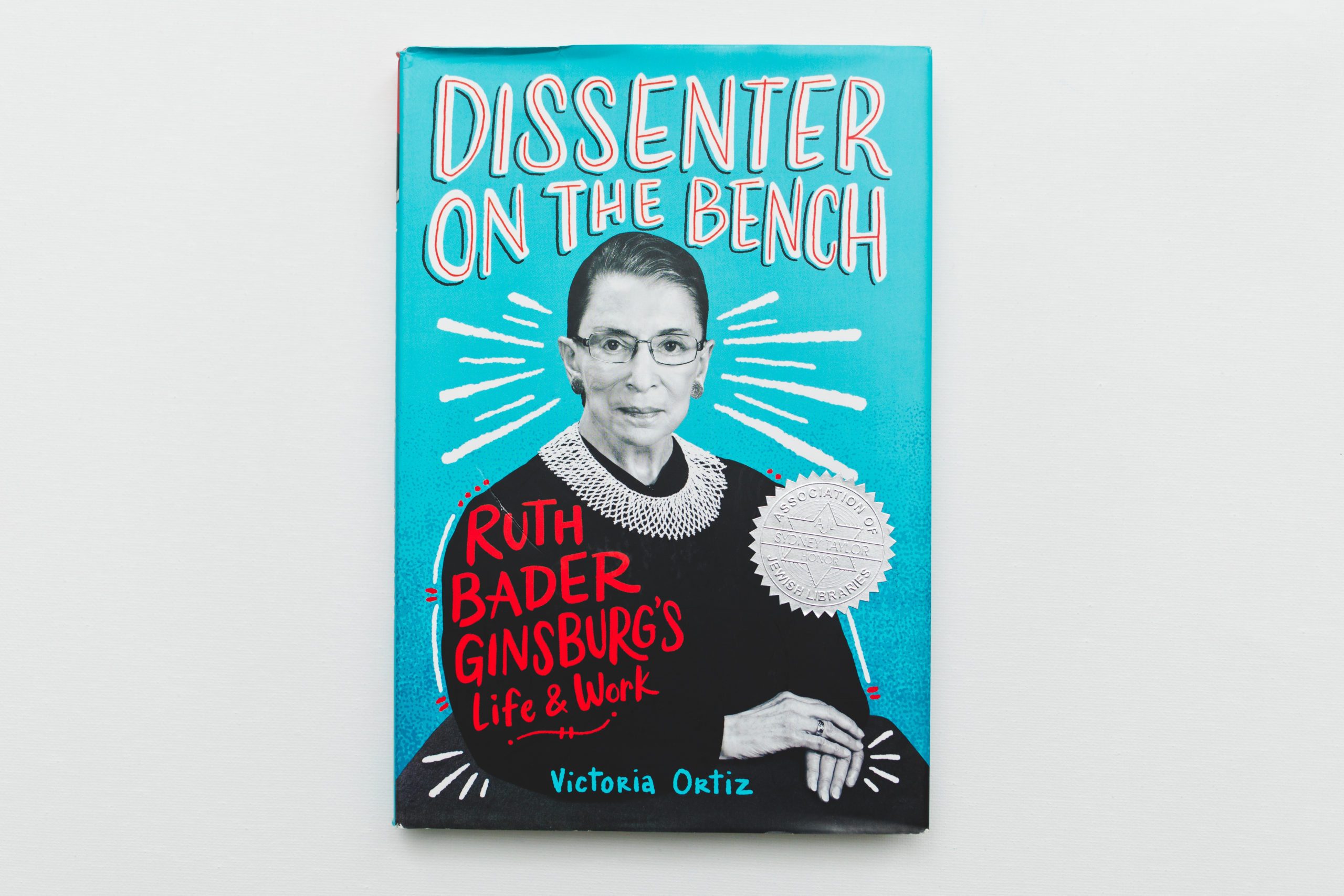 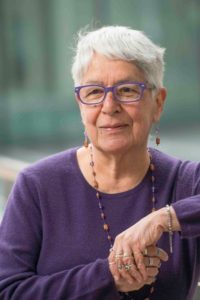 I  am reposting this interview from February 2020 in honor of Ruth Bader Ginsburg. May her memory be a blessing.

I am excited that Jewish Books for Kids is a stop on the Sydney Taylor Book Award Tour! It is my absolute honor to introduce Victoria Ortiz, winner of the STBA Silver Medal for her riveting book, Dissenter on the Bench: Ruth Bader Ginsburg’s Life & Work (Houghton Mifflin Harcourt).

Victoria is an attorney and the former dean of students at several law schools, including the School of Law of the University of California, Berkeley. She is a published translator and the author of a wide variety of nonfiction works for adults, teens, and children. She currently lives with her wife in Berkeley, California.

I couldn’t wait to learn more about Victoria and her process for creating this important book.

Dissenter on the Bench: Ruth Bader Ginsburg’s Life & Work, is a comprehensive work.  What inspired you to take on this project, and specifically as a book for young adults?

As a lawyer and as a woman, I had always been fascinated by Justice Ginsburg’s judicial contributions to expanding civil and human rights for women, in particular, and for all people in general.  Since she was only the second woman to be appointed to the U.S. Supreme Court, it was clear that she had very unique skills and talents which surpassed those of many other women or men with legal training.  So, when my publisher offered me the opportunity to write a YA biography of the Justice, I didn’t hesitate for a second!  My legal training and my earlier experience writing for that age group, as well as my strong commitment to celebrating advances in legal and civil rights of women, among others, made it obvious to me I had to take on the challenge.

Your research was clearly very extensive – both from a legal perspective and the deeply personal details of Ruth Bader Ginsburg’s life.  Can you give us just a glimpse into your research process?

My research process…  Well, at the beginning I try not to have any preconceived ideas about the structure of the book, the specific details, theories, or direction.  Where a biography is concerned, I know that I don’t want to produce a book that is strictly chronological.  That is, I do know even at the start of my process that the book is not going to begin with “XX was born on X date in X location.”  But that is the only overall guide for the book’s structure as I start the research.

Then I just immerse myself in reading any and everything I can find about the subject.  I avoid reading the subject’s own autobiographical writings at the beginning, as I don’t want my research to be shaped by it but rather by my own understanding.

In the case of someone like RBG, I began by reading interviews with her, law review articles about her, any and everything I could find that discussed her life, her thinking, her development as a lawyer and then a judge.  And of course, I read virtually every decision she has written as a Justice, indeed as a Judge before she was appointed to the Supreme Court.

I then read every single biography written about RBG, across every age group.  And I read all the law-related works about her as well.  And then I read her own autobiographical materials.

As I read, I made notes.  Eventually, I took notes from the notes and separated these thematically: Her parents; Her cases – District Court; Her ACLU clients; Her faith; Cornell years… etc. etc.

Eventually, a structure suggests itself and, when it does, I can start to write.

In the book, you describe several cases in great detail.  How did you choose the cases to profile? Is there one case that impacted you most?

I knew from the start that, since my target audience was young adult readers (and hopefully older adult readers with an interest in the subject), I would need to highlight cases that centered ordinary people’s legal struggles and not exclusively on abstract legal concepts (which might be fascinating to lawyers, but not necessarily to lay readers).  This helped me immediately with the choice of cases I might profile.  Thus, for example, although as a citizen and as an attorney I was and continue to be fascinated by the deep significance of Bush v. Gore, it is simply not a case that lends itself to being narrated as a story that might grip the interest on a YA reader.

So, I developed a long list of cases involving deeply human stories in which RBG had either written the majority opinion or the dissenting opinion, or in which she had joined the dissenting group of Justices.

And, of course, I also developed a list of cases which RBG handled as a volunteer attorney with the ACLU.  In this area, I found a wealth of information in the Ruth Bader Ginsburg Papers, held by the Library of Congress.  I spent many days reading through fascinating documents which allowed me to develop a deeper understanding of how she worked as a lawyer and later as a Judge and Justice.

Finally, I picked cases that would allow for good storytelling as well as segueing smoothly into the biographical narration of RBG’s life.

Honestly, it is really hard to pick just one case since there are so many compelling stories told in all the cases.  Also, I have interacted personally with so many of the people whose stories are told in the cases that I just can’t pick one over the other as far as impact is concerned!

Are there any interesting anecdotes or fun facts that didn’t make it into the book?

Indeed, there are!  I was tickled by the fact that the person who hired me to be Dean of Students at Berkeley Law (University of California) was Herma Hill Kay, the woman with whom RBG collaborated to produce the first casebook on Sex Discrimination and the Law!

Another chuckle was from the fact that RBG and I were both Summer Associates (several decades apart) at the same fancy New York law firm.  While the future Supreme Court Justice did not get an offer of full-time, post-law-school employment from them, I did!

A thrilling fact: A couple of summers ago, I was in Washington D.C. doing research and I also had the opportunity to attend a presentation by RBG at a local venue.  I managed to get a second-row seat.  Who should be sitting directly in front of me but Stephen Wiesenfeld, the hero of one of the stories in my book.  He was one of RBG’s earliest clients when she took on ACLU cases.  Her winning of his case made it possible for widowed men to receive the same Social Security inheritance benefits as widowed women.  He and I had corresponded extensively, but I had not yet met him in person.

What was your response when you heard you’d won the Sydney Taylor Honor Award?

My first response honestly was to burst into tears of joy!!  I am tremendously moved that my book was selected.  To me it means that the members of the Awards Committee understood what I set out to do with the telling of the stories and interweaving them with the Justice’s life events.  It is so encouraging because it confirms to me that there are countless readers out there whom I have never met and who will also be drawn into the narratives I have written.

4 thoughts on “May Her Memory Be A Blessing”