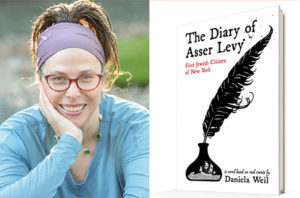 Daniela Weil is the author of the historical middle grade novel, The Diary of Asser Levy: First Jewish Citizen of New York (Pelican Publishing, 2020). The novel tells the story of the Jewish refugees who arrived in Manhattan in 1654. Beautifully crafted, with lots of visual interest, including maps, photos, documents, and more, the novel introduces readers to a fascinating slice of Jewish history. Daniela was born and raised in Sao Paulo, Brazil, but now lives in Houston, Texas. After attending Graded School, in her hometown of São Paulo, Brazil, Daniela Weil graduated from Brandeis University with a Bachelor’s degree Biology. Daniela then became both a marine mammal researcher, and a scientific illustrator. After moving to America, Daniela worked as a 3D medical illustrator and animator. Having been bitten by the history bug, she is passionate about digging up and writing about her diverse cultural heritage. Daniela lives in Austin, Texas, with her husband Erik, and energetic daughter Lucy.

Your story dates back to the 1600s. What were some of the challenges you faced doing research from so long ago?

Thank you, Daniela. Wishing you lots of success!

Learn more about Daniela and her work here Daniela Weil