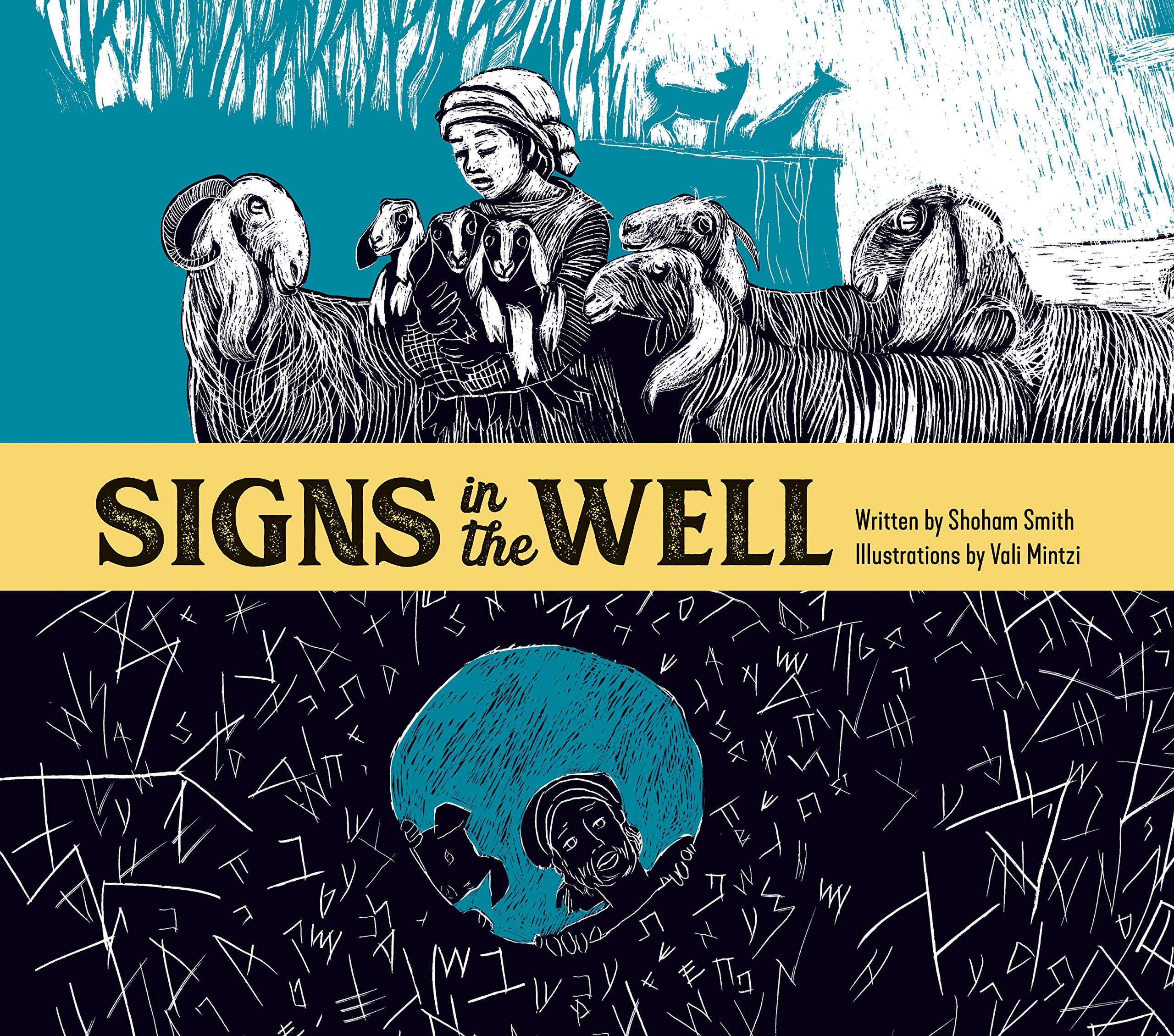 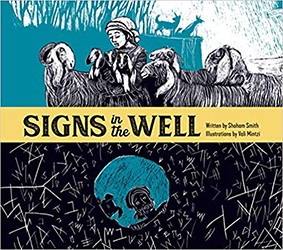 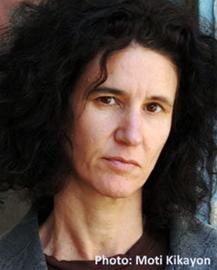 It is a great honor for me to introduce award-winning Israeli author, Shoham Smith, to chat about her book Signs in the Well (illustrated by Vali Mintzi). The picture book about Rabbi Akiva was originally published in Hebrew in 2013. The English version is published by Green Bean Books. I have long been inspired by the stories of Rabbi Akiva and I was delighted to discover Signs in the Well.  Learning more about Shoham, I found her perspective on the value of ancient Jewish wisdom deeply meaningful. I am excited to share our interview here.

Shoham is an author, translator, and teacher. She lives with her family  in Tel Aviv.

SIGNS IN THE WELL (Green Bean Books) is the story of Rabbi Akiva, and his quest for knowledge as an adult. What inspired you to write about Rabbi Akiva?

You ask about inspiration. Well, this isn’t one of those cases where the author wakes up in the middle of the night inspires by the insight: Rabbi Akiva! That’s the man to write about!

The book was written following a request I got from P.J. Library to rewrite one of a few stories I wrote about Rabbi Akiva, which are included in an anthology which itself was written after I had taken part in a special and exhilarating program at ALMA – HOME FOR HEBREW CULTURE founded  by Mrs. Ruth Kalderon. Through that program which was a kind of a BEIT MIDRASH for writers, journalists and artists, I got reacquainted with the legends of our ancient sages. I had liked them a lot as a child – I used to read Bialik’s version of them) but found out I couldn’t really read them to my children due the radical changes the Hebrew language has undergone. For years I wanted to “translate” them to Hebrew, but didn’t dare to do so. ALMA’s program gave me the courage, or perhaps the understanding that I – a youngish, secular, atheist woman, e.g. the furthest away from a Talmudic sage – am “allowed” to touch those legends and retell them in my own words and in the spirit of my world views. Of course, I was glad they chose this specific legend which enables us to discuss an ancient problem that is still bothering us today: the link between social status and economic condition and education and knowledge. Why do we give precedence to western knowledge over other kinds of knowledge, for example, that of a shepherd. Additionally, I thought it was a great story for children who are beginning to learn to read and find it difficult. And generally, to anyone who wishes to study something and give’s up on it because it’s “too late”. It’s a story that carries a very optimistic lesson.

What were your thoughts when you first saw Vali Mintzi’s art for SIGNS IN THE WELL?

Vali’s illustrations were no surprise to me. She is a close friend of mine and we had discussed the book and though together what would be right for it. In fact, the idea of using the Technik of etching – etching is a part of the story and serves as a metaphor to the knowledge which is etched into a person’s mind – was mine. I asked Vali, somewhat hesitantly if she would agree to do it because it’s a very laborious, Technik… but the two of us were very enthusiastic with the idea, and also with the fact that the illustrations will be in black-and-white – with a tremendous presence of black; that the book itself will be the well in which the signs were etched and from which one drinks the ancient knowledge – the story.

When Vali sent me the first illustrations, I thought they were wonderful. I thought it was real art and that there is no such children’s book – so very black and yet illuminated – and that adults too will enjoy the illustrations which were part of the new interpretation of the story. I thought it was a genuine ARTIST BOOK! However, people at the Publisher’s and at PJ Library were taken aback, sort to speak. They started to see black – as we say in Hebrew and insisted on adding a little bit of color. The book is beautiful and very special even with the colorful additions, but we still dream of publishing our black book one day.

You do a lot of work translating stories into Hebrew. You write for children and adults. How are each of these creative processes different?

These are very similar processes, and what is they all have in common is passion. One should not write without passion because the texts that are written without passion are nothing but dead letters. Also, I must say that I don’t believe in these categories: adults’ literature as opposed to children’s literature. For me these are not two separate continents or two departments in the brains. When I write so-called “children’s literature”, the reader I address it to is two fold: a child and an adult. This literature ought to satisfy both of them. Its uniqueness is in being able to be read by both publics and offer interest and pleasure for both, whereas adult’s literature is aimed only at grownups.

Perhaps the main difference between the two writings is that absurdly, when I write for children, I am much freer. It’s absurd because, seemingly, when I write for adults, I have total freedom to write everything that comes to my mind, and to use all the words at my disposal. Consequently, the endless amount of possibilities in writing for adults creates endless vacillations and hesitations and makes the process longer and more torturous. Somehow, when I write “for children” I always quickly find the voice, the tone and the “language” that fit that specific story. I wish I could deceive myself, when I write a story I know in advance is not for children (for even I acknowledge that there are subjects and texts which are not for children or that not everything is of interest for children) but alas I cannot. I wrote a book of short stories – which I doubt will ever get published –   that are aimed at a multi-aged reader. I call it “Stories for No One” because I am afraid that because they are aimed at “everyone”‘ they will fall between two stools, to a twilight zone, to no-man’s land. Many people find it hard to deal with no-man’s lands and things that fall out of boxes.

As for translations, that is of course different, mainly in the degree of freedom the writer is allowing herself. When I translate I don’t have the total freedom I have as an independent writer, and yet, my personality and my vernacular (and those of my partner, Amnon Katz, with whom I usually translate) seep into the translated text and add to it personal nuance and touch.

I read a beautiful quote from you about stories from the sages being “spiritual treasures of the Jewish people.” Can you tell me a bit more about this?

To me, the Jewish ancient sages are masters of the short story. Their force is their knack to tell in few words a very complicated and sometimes subversive and timeless story. It’s not obvious that a two thousand years old story is able to touch nowadays readers, to thrill them and to incite them to thinking and to offer aesthetic pleasure. The greatest talent of those Jewish sages was in minimalism; In choosing the most accurate, expressive words and ink drawings that the are created by the tongue. They are painters of highly expressive pictures, which are also complex symbols. In this respect, Signs in the Well offers an unforgettable and multi-significances picture:

The well, the water, the etching marks – they are all symbols of knowledge.

The well symbolizes simultaneously the empty void in Rabbi Akiva’s life, and the spring of wisdom that fills it.

Also, Rabbi Akiva’s occupation, a shepherd, is of course symbolic – like King David, like Moses, goat herding is a school for leadership. It is the symbols and the pictures that turn the story from an educational fable into an artistic (poetic?) text. Without them the story would’ve sounded something like that: Akiva was a poor hard-working man. Only at the age of 40 after 30 years of hard work, did he save enough money to go to college and he studied and in no time became a charismatic professor admired by his students and whose papers were published in the best journals of his time.

5 thoughts on “Signs in the Well – Shoham Smith”

Jewish Books for Kids was established to create a sense of community through interviews with writers, illustrators, editors, and more. The site is a celebration of Jewish books for children and a resource for parents, educators, and readers. If you have a traditionally published book you would like to see featured on Jewish Books for Kids, please email me at [email protected]