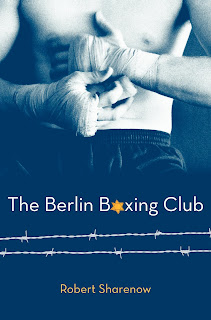 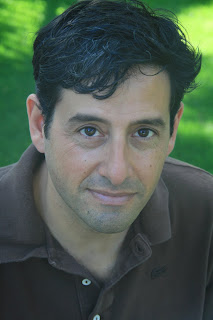 I am honored to introduce Rob Sharenow, winner of the 2012 gold medal in the Sydney Taylor Book Award’s TeenReaders Category for The Berlin Boxing Club published by HarperTeen. This historical novel reveals the history of Nazi Germany through the eyes of Karl Stern, a typical 14-year-old German boy. Karl never gave much thought to being Jewish and had little connection with any religious life. When classmates bully Karl, he is forced to face the dangers in his own community. Given the opportunity to learn boxing from German champion Max Schmeling, Karl jumps at the chance. He grows strong and learns to defend himself. But as the Nazi’s gain power and his family is in peril, Karl questions who he can trust. The Berlin Boxing Club is a riveting read – bringing history to life in a compelling story that will inspire readers of all ages.

I’m thrilled to have the opportunity to speak with Rob and learn more about The Berlin Boxing Club.

In Berlin Boxing Club, Karl is a believable teen. His thoughts, emotions, and experiences will ring true for today’s readers. Interestingly, Karl doesn’t identify with being Jewish. Why was this an important part of Karl’s character?

I think most teenagers have mixed feelings about their identity, particularly if they don’t see themselves as part of a majority. I grew up in a town where Jews were a real minority. Despite being brought up with a strong Jewish background, I did not love the idea of being identified as the class “Jew” at school and having to answer for that in any way. At school, I wanted to be just another kid, and I was largely able to achieve that in modern America. Nazi Germany did not allow for such choices. In 1930s Berlin, a Jew was a Jew and you could never deny or change that in the eyes of anyone. I specifically made Karl come from a non-observant family to amplify just how unfair the Nazi labeling could be. Interestingly, although Karl does not consider himself Jewish, his interests reflect that identity without him even knowing it. His love of comic books and cartooning is a very Jewish trait, as is his love of the sport of boxing. One of the wonderful revelations for his character is his discovery of the Jewish fighters who filled the U.S. boxing ranks at the time. For a German boy, it was a complete shock to see that kind of powerful image of Jewish masculinity. It still is.

After Karl is attacked by bullies at school and jumps at the opportunity to learn boxing from Max Schmeling. What sparked your interest in the famous boxer?
I first learned about Schmeling when I was working as a writer for the History Channel. I was astonished to learn that he had never joined the Nazi party and his manager and close friends were Jews. This completely flew in the face of all my assumptions about him being an Aryan superman and a poster boy for Hitler. I’m a real history buff and I’m always intrigued when a character from history reveals some unexpected quality or dimension. Also, Schmeling’s life had an epic quality, he was a boxing champion, a soldier, he married a movie star, and then went on to become a hugely successful businessman. I haven’t come across many characters who led such a varied and exciting life.

As a work of historical fiction, how much research was involved in writing the story? How concerned are you with balancing fact and fiction?

I researched the subject for several years. I love interweaving fact and fiction, but I’m very careful to try to keep the historical characters as rooted in reality as possible. To understand Schmeling, I studied everything I could about him, read his autobiography, watched films of all his fights and TV appearances. I tried to make sure I was capturing him as realistically as possible.

In the process of researching and writing, what is the most surprising or interesting thing you discovered?

I was most shocked by how much many Jewish boys in Nazi Germany wanted to join the Hitler Youth. Like most kids, they just wanted to belong to the cool new club that all of their friends were joining. I read an incredible memoir called Destined to Witness: Growing Up Black in Nazi Germany by Hans J Massaquoi, and he conveyed much of the same emotion. The book cover has a photograph of him as a young black boy, with a homemade swastika pinned to his sweater. The power of adolescent longing transcends politics. You just want to fit in.