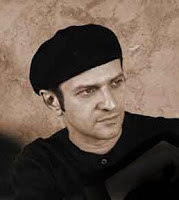 I’m pleased to introduce children’s book illustrator, Marc Lumer. Marc Lumer’s early works have appeared on the Warner Bros hit shows Batman and Superman. While Lumer was at DreamWorks his paintings helped create the animated films Prince of Egypt and The Road to El Dorado. He now owns and operates a boutique advertising agency in Los Angeles, MarcLumerDesign.com. Marc does a lot of work with for Jewish organizations. He created the colorful dancing Rabbis on billboards and banners for the Chabad Telethon adds and the logo for the web site AskMoses.com, and creates the designs and illustrations Farbrengen Magazine. Marc lives in Fairfax district of Los Angeles with his family.

Tell me about your new book.

When Miracles Happened: The Wondrous Stories of Tzaddikim (Targum), is inspired from ancient Sephardic tales about of two famous ancestors of the Baba Sale. In the first story we follow Rabbi Shmuel Elbaz on his way to collect money for an impoverished community and see how he will he get to his destination without money to pay the ships captain. In second story we watch his descendant, Rabbi Yaakov, travel through the desert and discover how he will save his life when confronted by a band of robbers. The book, retold by Esther Davis, is aimed to teach young children the meaning of Jewish courage and faith.

As an illustrator, is it challenging to create art based on a writer’s words?

In general if you are working with a good writer that knows his craft it is pretty easy. Good writers have a good visual sense and they create their stories with a sense of what will be interesting to illustrate.

Was any research involved?

The illustration style in this book is realistic and the stories take place in two specific time periods. I did quite a bit of research on everything from costumes to backgrounds and from weapons to ships. I even did a photo shoot with models for some parts of the book to get the expressions right.

Are you working on anything new?

Marc, thanks for givng us insight into the illustrator’s process. To learn more about Marc and his work, please visit http://www.marclumerdesign.com/