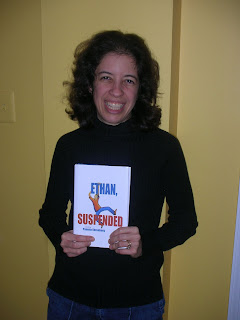 Pamela Ehrenberg is the author of ETHAN SUSPENDED, a multi-layered novel about a boy who moves into the home of his grandparents. ETHAN SUSPENDED is a wonderful example of a growing genre in Jewish kidlit, with a strong Jewish character in a story that will appeal to kids of all backgrounds. Pamela is a former teacher. She currently lives in Washington, DC, with her husband and young daughter. I’m so happy to welcome Pamela and share her thoughts about writing.

Tell me a little bit about your latest book. Why were you drawn to write about a Jewish theme or character?

Ethan, Suspended (Eerdmans Books for Young Readers) was published in March 2007; it’s about a kid who moves to Washington, DC, to live with his grandparents and becomes the only white, and Jewish, student at his junior high school. He also becomes the world’s first jazz oboist.

I don’t think I consciously chose to write about Jewish characters; it was more like as they talked (and ate) I realized that of course they were Jewish. Exploring the history of Ethan’s family in DC, and why his grandparents stayed put as their friends moved out to the suburbs, made me want to learn about Jewish roles during the Civil Rights Movement and past and present relationships between Jewish and African-American communities.

Mostly it was the first-hand experience of teaching in a DC junior high. The school Ethan attends is fictional, but the setting was inspired by a school where I taught seventh and eighth-grade English a few years ago. As I was writing, I found gaps in my knowledge that led me to do some research at the DC Historical Society and the Martin Luther King, Jr. Memorial Library (the stairwell of which appears in the book itself, as the site of the novel’s one kiss). I also researched a few questions online, such as when I needed to know what flavors Fruit-by-the-Foot comes in.

I think I’ve always been one: I remember “writing” a story in kindergarten and being dismayed when the ending was misinterpreted by one of my classmates. That was when I first thought about the relationship between writer and reader, how what I put on the page doesn’t matter nearly as much as what the reader thinks is there. As an English major in college, I spent a couple of years trying to write “literary” short stories, until a professor returned a draft to me with the note, “This sounds like the first chapter of a young people’s novel.” That comment freed me to write what I had always loved.

What are you working on now?

I’m working on edits for my new book, currently called “Tillman County Fire,” which is due out from Eerdmans in late 2008 or early 2009. It’s about a fire that takes place in a rural West Virginia community–one of the main characters is one-quarter Jewish (through his father), so we’ll see whether it’s ultimately considered “Jewish book.” And I’m also working on a new novel, about a Jewish extended family in 1950s Baltimore.

A few fun facts about me:

I live in Washington, D.C., with my husband Eric and daughter Talia (age 2.5 as of this writing). Neighborhood favorites include Butterscotch and Brownie, the gerbils in the kids’ area of our library; a phenomenal Tot Shabbat service; and a couple of really nice coffee shops for writing. This year we came off the waiting list for a plot in our community garden, and Talia and I successfully grew 11 tomatoes and more kale than any of us had thought possible. More fun facts about me are on my website, www.pamelaehrenberg.com.

Passover. I love the seders, especially our wildly off-key versions of adapted classics (in my family, “Adir Bimlicha” became “Grebow of Pimlico” in honor of my late grandfather’s insurance business) and new favorites like “Don’t Sit on the Afikomen.” I love re-discovering treasures like the frog dish for holding saltwater (a gift from the rabbi who married us) and the plastic clapping hands that, after enough wine, sound vaguely like hail. But mostly I love how everything feels different for a week when our foods and dishes are different. I think a good book can have a similar effect, making the familiar seem just a little bit unfamiliar, making me see the world a little bit differently.

Pamela, thanks for sharing your thoughts! I promise to forward requests for the lyrics to “Don’t sit on the Afikomen!”