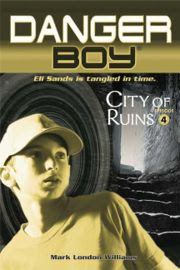 Mark Williams is the author of the DANGER BOY (Candlewick) books, a time-travel series that chronicles the adventures of Eli Sands and his friends. The newest title, DANGER BOY CITY OF RUINS, is set in Ancient Jerusalem. Through Eli’s adventures, readers are taken on an exciting action-packed ride that will thrill kids (and adults) ages 9 and up.

Mark is my SCBWI colleague, and I am thrilled he was willing to share thoughts and insights about his work. Aside from authoring highly acclaimed books, Mark is a columnists for a Hollywood trade paper, and his work has appeared in numerous publications. He is also a Judaic studies teacher at Leo Baeck Temple in West Los Angeles. Most importantly, Mark is the proud dad of two boys who were the inpiration for the Danger Boy books.

In your latest book, DANGER BOY:CITY OF RUINS, Eli travels back in time to Ancient Jerusalem. What inspired you to choose this setting?
Multiple, overlapping reasons: I’m Jewish (well, a lively mix, between mom and dad, of both Jewish and Celtic traditions!), I was sitting in my Sunday school classroom one morning after teaching about the prophets Jeremiah and Huldah, and thinking about ideas for future “Danger Boy” books, but mostly thinking about how rigid adult belief structures, and old inescapable grief, lead to “cities of ruin” for our children. That, plus the fact that particular region was again keeping the world dancing on the edge of the abyss.

How extensive was your research?
Did I get to go to Israel? No. I asked a lot of the Israelis I teach with questions about how the weather feels at certain times of year, what the “air” is like, etc. That and a lot of Internet, a lot of reading, etc.

When writing a time travel story, how concerned must an author be about accuracy?
Being as accurate as you can is the payoff for the stuff you make up — especially when the “real” history is more incredible than the “storytelling” parts, which is usually the case. And it’s also relative — I had to be really accurate in my “Lewis & Clark book” (DB #3: Trail of Bones), since they all kept journals!
As for Jeremiah and Huldah — there are no records, outside Tanakh, of family names, any kind of life outside their described mythic roles. Which made it simultaneously easier and harder because they are already large, mythic, etc.

Do you have any advice for authors who are interested in writing time travel stories?
Emphasize the history, over the quantum science. As fascinating and great as the quantum science is. In other words, what’s the reason your characters are time traveling in the first place? Where are they going?
Of course, if you have them traveling *ahead,* to a still unchartered future, forget I said anything.

Why did you start writing children’s books?
I’d been writing comics and videogame scripts (in the early Jurassic era of the medium), and then became a dad. As I revisited early/mid-90’s picture books, there seemed to be a renaissance similar to what comics went through in the 80’s! But nothing new appeared to be happening in series fiction, for when readers “graduated” from picture books (never mind that I still like a good Chris van Allsburg offering…)

So I thought, “what if you had a series that was interconnected, somewhat dark, where people aged and came and went — like in life?” Apparently, I was looking for psychic real estate in the suburbs of J.K. Rowling’s zeitgeist, but hadn’t heard of Harry Potter when I sat down to start “Danger Boy” (the title coming from my then toddler — now a teenager — as he ran up and down the halls one night proclaiming himself, yes, a “Danger Boy!”)

However, the year I was shopping chapters and proposals around, the adventures of a certain young British wizard at boarding school took off, and other editors and houses thought, “hey! yeah! darkish interconnected series!” So — thanks, J.K.!

What are you working on now?
I’ m revising the last contracted “Danger Boy” book, “Fortune’s Fool,” about Shakespeare, Marlowe, the Elizabethans, and their fondness for political intrigue, rendition, torture, etc. (Plus, you know, I get to write about “King Lear.”)

And then there’s the post “Danger Boy” stuff — a YA set in Jamaica, a mystery series, still nascent, and, well, another stand-alone, set in the SoCal desert, involving, well, the cosmos again, kinda.

Plus, I’d love to get back into graphic novel writing, and have some feelers out.

What is the best thing about being a children’s writer?
It’s just such a fun thing to be! I get to write stories about baseball and dinosaurs and Shakespeare and Marlowe and Sacajawea and the secrets of Alexandria, and it’s my job!

Well, of course, I have to take on some other jobs, too — did I mention I teach writing classes?

What is the hardest part about being a writer?
You actually have to sit down and write.

What do you like to read?
I love reading new work by my various colleagues. On a recent panel with Lisa Yee, Kerry Madden, Amy Koss, Cecil Castellucci and Sally Nemeth, I likened the LA YA scene with late 60’s rock (well, you know, I couldn’t resist) — i.e., everyone “hearing” each other’s work, learning from it, pushing past what’s been done, everyone helping amp up everyone’s chops, etc.

I read news all the time, online, still read comics, been rereading some Kesey and trying to make new sense of “Sometimes a Great Notion,” and lately, on a mini-Cormac McCarthy tear.

Do you have hobbies besides writing?
Watching baseball. Taking long walks, preferably, in wild or semi-wild areas(a.k.a. hiking) whenever possible.

Thanks, Mark! It was a pleasure blog chatting with you. See you in the “future!”

If you would like to know more about Mark,or the adventures of Eli Sands in the DANGER BOY series, check out www.dangerboy.com